Does Mednax Inc. (NYSE:MD) represent a good buying opportunity at the moment? Let’s briefly check the hedge fund interest towards the company. Hedge fund firms constantly search out bright intellectuals and highly-experienced employees and throw away millions of dollars on research activities, so it is no wonder why they tend to generate millions in profits each year. It is also true that some hedge fund players fail inconceivably on some occasions, but their stock picks have been generating superior risk-adjusted returns on average over the years.

Mednax Inc. (NYSE:MD) was in 25 hedge funds’ portfolios at the end of September. MD investors should pay attention to a decrease in hedge fund sentiment in recent months. There were 27 hedge funds in our database with MD holdings at the end of the previous quarter. Our calculations also showed that MD isn’t among the 30 most popular stocks among hedge funds.

To the average investor there are plenty of formulas shareholders can use to size up their stock investments. Some of the most useful formulas are hedge fund and insider trading moves. We have shown that, historically, those who follow the best picks of the top money managers can outclass the S&P 500 by a healthy amount (see the details here). 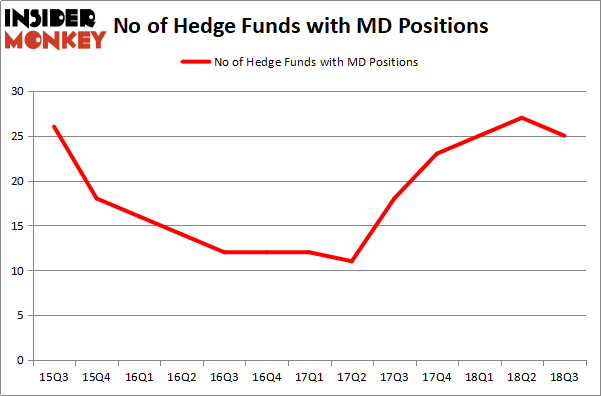 The largest stake in Mednax Inc. (NYSE:MD) was held by Blue Harbour Group, which reported holding $193.8 million worth of stock at the end of September. It was followed by Pzena Investment Management with a $151.8 million position. Other investors bullish on the company included Elliott Management, P2 Capital Partners, and OrbiMed Advisors.

Due to the fact that Mednax Inc. (NYSE:MD) has witnessed falling interest from the aggregate hedge fund industry, it’s safe to say that there were a few hedgies that decided to sell off their full holdings in the third quarter. At the top of the heap, Kenneth Squire’s 13D Management cut the largest investment of the “upper crust” of funds tracked by Insider Monkey, totaling close to $7.8 million in stock, and Glenn Russell Dubin’s Highbridge Capital Management was right behind this move, as the fund sold off about $5.4 million worth. These bearish behaviors are important to note, as total hedge fund interest dropped by 2 funds in the third quarter.

As you can see these stocks had an average of 19.75 hedge funds with bullish positions and the average amount invested in these stocks was $330 million. That figure was $835 million in MD’s case. GDS Holdings Limited (NASDAQ:GDS) is the most popular stock in this table. On the other hand Senior Housing Properties Trust (NYSE:SNH) is the least popular one with only 13 bullish hedge fund positions. Mednax Inc. (NYSE:MD) is not the most popular stock in this group but hedge fund interest is still above average. This is a slightly positive signal but we’d rather spend our time researching stocks that hedge funds are piling on. In this regard GDS might be a better candidate to consider a long position.