Our extensive research has shown that imitating the smart money can generate significant returns for retail investors, which is why we track nearly 750 active prominent money managers and analyze their quarterly 13F filings. The stocks that are heavily bought by hedge funds historically outperformed the market, though there is no shortage of high profile failures like hedge funds’ 2018 losses in Facebook and Apple. Let’s take a closer look at what the funds we track think about Freeport-McMoRan Inc. (NYSE:FCX) in this article.

Is Freeport-McMoRan Inc. (NYSE:FCX) a buy here? Hedge funds are selling. The number of bullish hedge fund bets were cut by 9 lately. Our calculations also showed that FCX isn’t among the 30 most popular stocks among hedge funds (view the video below).

Today there are a multitude of signals stock market investors use to size up publicly traded companies. Some of the less known signals are hedge fund and insider trading signals. We have shown that, historically, those who follow the best picks of the top hedge fund managers can beat the market by a very impressive margin (see the details here). 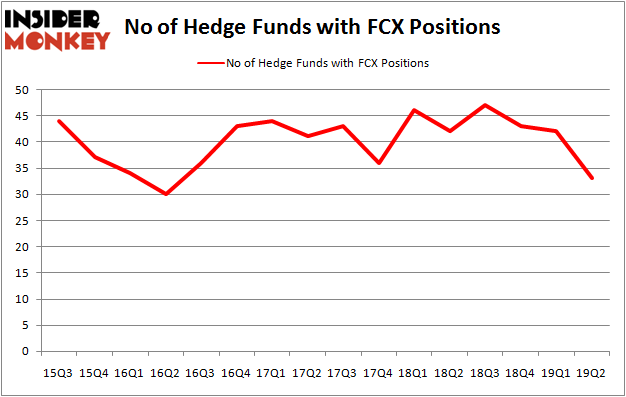 Unlike some fund managers who are betting on Dow reaching 40000 in a year, our long-short investment strategy doesn’t rely on bull markets to deliver double digit returns. We only rely on hedge fund buy/sell signals. We’re going to go over the fresh hedge fund action regarding Freeport-McMoRan Inc. (NYSE:FCX).

How have hedgies been trading Freeport-McMoRan Inc. (NYSE:FCX)?

At the end of the second quarter, a total of 33 of the hedge funds tracked by Insider Monkey were long this stock, a change of -21% from one quarter earlier. By comparison, 42 hedge funds held shares or bullish call options in FCX a year ago. With hedge funds’ positions undergoing their usual ebb and flow, there exists an “upper tier” of notable hedge fund managers who were adding to their holdings considerably (or already accumulated large positions).

According to publicly available hedge fund and institutional investor holdings data compiled by Insider Monkey, Icahn Capital LP, managed by Carl Icahn, holds the most valuable position in Freeport-McMoRan Inc. (NYSE:FCX). Icahn Capital LP has a $512.9 million position in the stock, comprising 1.9% of its 13F portfolio. Coming in second is Fisher Asset Management, managed by Ken Fisher, which holds a $341.8 million position; the fund has 0.4% of its 13F portfolio invested in the stock. Other hedge funds and institutional investors with similar optimism encompass Phill Gross and Robert Atchinson’s Adage Capital Management, Israel Englander’s Millennium Management and Mark Kingdon’s Kingdon Capital.

Seeing as Freeport-McMoRan Inc. (NYSE:FCX) has faced a decline in interest from the entirety of the hedge funds we track, it’s safe to say that there was a specific group of hedgies that slashed their full holdings heading into Q3. Interestingly, Mike Masters’s Masters Capital Management said goodbye to the largest investment of the “upper crust” of funds watched by Insider Monkey, comprising an estimated $25.8 million in stock, and David Costen Haley’s HBK Investments was right behind this move, as the fund cut about $11 million worth. These moves are interesting, as total hedge fund interest dropped by 9 funds heading into Q3.

As you can see these stocks had an average of 29.25 hedge funds with bullish positions and the average amount invested in these stocks was $1178 million. That figure was $1184 million in FCX’s case. D.R. Horton, Inc. (NYSE:DHI) is the most popular stock in this table. On the other hand Nasdaq, Inc. (NASDAQ:NDAQ) is the least popular one with only 20 bullish hedge fund positions. Freeport-McMoRan Inc. (NYSE:FCX) is not the most popular stock in this group but hedge fund interest is still above average. This is a slightly positive signal but we’d rather spend our time researching stocks that hedge funds are piling on. Our calculations showed that top 20 most popular stocks among hedge funds returned 24.4% in 2019 through September 30th and outperformed the S&P 500 ETF (SPY) by 4 percentage points. Unfortunately FCX wasn’t nearly as popular as these 20 stocks and hedge funds that were betting on FCX were disappointed as the stock returned -17.2% during the third quarter and underperformed the market. If you are interested in investing in large cap stocks with huge upside potential, you should check out the top 20 most popular stocks among hedge funds as many of these stocks already outperformed the market so far this year.