Insider Monkey finished processing more than 700 13F filings made by hedge funds and prominent investors. These filings show these funds’ portfolio positions as of September 30th. In this article we are going to take a look at smart money sentiment towards Fitbit Inc (NYSE:FIT).

Is Fitbit Inc (NYSE:FIT) undervalued? The best stock pickers are in a pessimistic mood. The number of bullish hedge fund positions decreased by 3 recently. Our calculations also showed that FIT isn’t among the 30 most popular stocks among hedge funds. FIT was in 17 hedge funds’ portfolios at the end of the third quarter of 2018. There were 20 hedge funds in our database with FIT holdings at the end of the previous quarter.

How have hedgies been trading Fitbit Inc (NYSE:FIT)?

Heading into the fourth quarter of 2018, a total of 17 of the hedge funds tracked by Insider Monkey were bullish on this stock, a change of -15% from one quarter earlier. Below, you can check out the change in hedge fund sentiment towards FIT over the last 13 quarters. So, let’s find out which hedge funds were among the top holders of the stock and which hedge funds were making big moves. 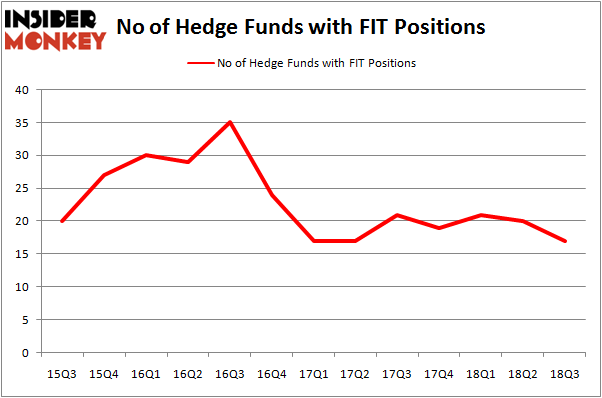 Among these funds, Millennium Management held the most valuable stake in Fitbit Inc (NYSE:FIT), which was worth $25.9 million at the end of the third quarter. On the second spot was Renaissance Technologies which amassed $18 million worth of shares. Moreover, Coatue Management, PDT Partners, and Rima Senvest Management were also bullish on Fitbit Inc (NYSE:FIT), allocating a large percentage of their portfolios to this stock.

Due to the fact that Fitbit Inc (NYSE:FIT) has faced bearish sentiment from the aggregate hedge fund industry, it’s easy to see that there is a sect of hedge funds that elected to cut their entire stakes last quarter. Intriguingly, David Costen Haley’s HBK Investments cut the largest stake of the “upper crust” of funds watched by Insider Monkey, comprising about $3.5 million in stock, and Sander Gerber’s Hudson Bay Capital Management was right behind this move, as the fund dropped about $3.5 million worth. These bearish behaviors are interesting, as total hedge fund interest fell by 3 funds last quarter.

As you can see these stocks had an average of 13 hedge funds with bullish positions and the average amount invested in these stocks was $69 million. That figure was $86 million in FIT’s case. Party City Holdco Inc (NYSE:PRTY) is the most popular stock in this table. On the other hand State Auto Financial Corporation (NASDAQ:STFC) is the least popular one with only 3 bullish hedge fund positions. Fitbit Inc (NYSE:FIT) is not the most popular stock in this group but hedge fund interest is still above average. This is a slightly positive signal but we’d rather spend our time researching stocks that hedge funds are piling on. In this regard PRTY might be a better candidate to consider a long position.

Is Insmed Incorporated (INSM) A Good Stock To Buy?
Monthly Newsletter Strategy
Download a free copy of our newsletter and see the details inside!
Hedge Fund Resource Center
Related News
Fitbit, Zynga, Jones Energy, and More: Here’s Why These Stocks Are On The Move 37 Major Stories Summarizing What’s Happening In The Financial Markets Today Five Cheap Tech Stocks to Buy Now Amid Horrendous Year, Crispin Odey Turns to These Stocks for Reprieve Here is What Hedge Funds Think About Fitbit Inc (FIT) Fitbit Inc (FIT) Stock: Is An Acquisition Coming? How the Market is Reacting To Acacia, iRobot, Fitbit, and More Today 10 Easiest Winter Olympic Sports to Qualify for 11 Countries With The Worst Modern Music In The World The Top 5 Robo Advisor Apps of 2018
Billionaire Hedge Funds