The elite funds run by legendary investors such as David Tepper and Dan Loeb make hundreds of millions of dollars for themselves and their investors by spending enormous resources doing research on small cap stocks that big investment banks don’t follow. Because of their pay structures, they have strong incentives to do the research necessary to beat the market. That’s why we pay close attention to what they think in small cap stocks. In this article, we take a closer look at Dillard’s, Inc. (NYSE:DDS) from the perspective of those elite funds.

Is Dillard’s, Inc. (NYSE:DDS) a bargain? Prominent investors are reducing their bets on the stock. The number of bullish hedge fund bets were trimmed by 8 in recent months. Our calculations also showed that DDS isn’t among the 30 most popular stocks among hedge funds (see the video below). DDS was in 20 hedge funds’ portfolios at the end of June. There were 28 hedge funds in our database with DDS positions at the end of the previous quarter.

How have hedgies been trading Dillard’s, Inc. (NYSE:DDS)? 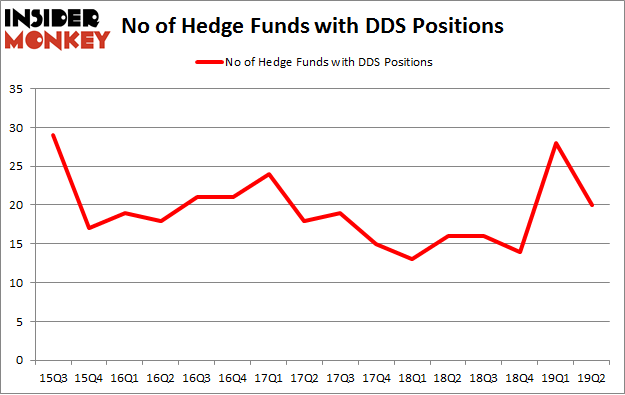 The largest stake in Dillard’s, Inc. (NYSE:DDS) was held by Southeastern Asset Management, which reported holding $92 million worth of stock at the end of March. It was followed by AQR Capital Management with a $60 million position. Other investors bullish on the company included Greenlight Capital, Citadel Investment Group, and Renaissance Technologies.

Since Dillard’s, Inc. (NYSE:DDS) has experienced bearish sentiment from the entirety of the hedge funds we track, it’s safe to say that there were a few fund managers that elected to cut their entire stakes in the second quarter. It’s worth mentioning that Lee Ainslie’s Maverick Capital cut the largest position of the “upper crust” of funds watched by Insider Monkey, comprising an estimated $12.9 million in stock, and Ken Griffin’s Citadel Investment Group was right behind this move, as the fund dumped about $12.6 million worth. These transactions are interesting, as aggregate hedge fund interest fell by 8 funds in the second quarter.

Let’s check out hedge fund activity in other stocks – not necessarily in the same industry as Dillard’s, Inc. (NYSE:DDS) but similarly valued. We will take a look at Tanger Factory Outlet Centers Inc. (NYSE:SKT), Arch Coal, Inc. (NYSE:ARCH), Ebix Inc (NASDAQ:EBIX), and ShockWave Medical, Inc. (NASDAQ:SWAV). All of these stocks’ market caps are closest to DDS’s market cap.

As you can see these stocks had an average of 16.5 hedge funds with bullish positions and the average amount invested in these stocks was $180 million. That figure was $208 million in DDS’s case. Arch Coal, Inc. (NYSE:ARCH) is the most popular stock in this table. On the other hand ShockWave Medical, Inc. (NASDAQ:SWAV) is the least popular one with only 7 bullish hedge fund positions. Dillard’s, Inc. (NYSE:DDS) is not the most popular stock in this group but hedge fund interest is still above average. Our calculations showed that top 20 most popular stocks among hedge funds returned 24.4% in 2019 through September 30th and outperformed the S&P 500 ETF (SPY) by 4 percentage points. Hedge funds were also right about betting on DDS as the stock returned 6.4% during the third quarter and outperformed the market. Hedge funds were rewarded for their relative bullishness.