Before we spend countless hours researching a company, we like to analyze what insiders, hedge funds and billionaire investors think of the stock first. This is a necessary first step in our investment process because our research has shown that the elite investors’ consensus returns have been exceptional. In the following paragraphs, we find out what the billionaire investors and hedge funds think of Companhia Energetica de Minas Gerais (NYSE:CIG).

Companhia Energetica de Minas Gerais (NYSE:CIG) has seen a decrease in hedge fund interest of late. Our calculations also showed that CIG isn’t among the 30 most popular stocks among hedge funds.

At the end of the second quarter, a total of 8 of the hedge funds tracked by Insider Monkey were bullish on this stock, a change of -11% from one quarter earlier. By comparison, 7 hedge funds held shares or bullish call options in CIG a year ago. With the smart money’s positions undergoing their usual ebb and flow, there exists a few noteworthy hedge fund managers who were upping their holdings substantially (or already accumulated large positions). 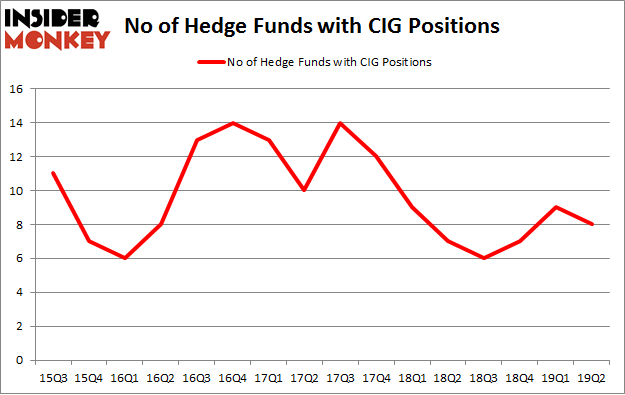 The largest stake in Companhia Energetica de Minas Gerais (NYSE:CIG) was held by Millennium Management, which reported holding $16 million worth of stock at the end of March. It was followed by AQR Capital Management with a $15 million position. Other investors bullish on the company included Renaissance Technologies, Arrowstreet Capital, and Citadel Investment Group.

Judging by the fact that Companhia Energetica de Minas Gerais (NYSE:CIG) has experienced a decline in interest from hedge fund managers, it’s safe to say that there is a sect of money managers who sold off their full holdings by the end of the second quarter. Intriguingly, Michael Platt and William Reeves’s BlueCrest Capital Mgmt. said goodbye to the largest stake of all the hedgies monitored by Insider Monkey, valued at close to $0.3 million in stock, and Matthew Hulsizer’s PEAK6 Capital Management was right behind this move, as the fund dropped about $0 million worth. These bearish behaviors are important to note, as aggregate hedge fund interest fell by 1 funds by the end of the second quarter.

As you can see these stocks had an average of 24 hedge funds with bullish positions and the average amount invested in these stocks was $386 million. That figure was $49 million in CIG’s case. Synovus Financial Corp. (NYSE:SNV) is the most popular stock in this table. On the other hand Brixmor Property Group Inc (NYSE:BRX) is the least popular one with only 15 bullish hedge fund positions. Compared to these stocks Companhia Energetica de Minas Gerais (NYSE:CIG) is even less popular than BRX. Hedge funds dodged a bullet by taking a bearish stance towards CIG. Our calculations showed that the top 20 most popular hedge fund stocks returned 24.4% in 2019 through September 30th and outperformed the S&P 500 ETF (SPY) by 4 percentage points. Unfortunately CIG wasn’t nearly as popular as these 20 stocks (hedge fund sentiment was very bearish); CIG investors were disappointed as the stock returned -11% during the third quarter and underperformed the market. If you are interested in investing in large cap stocks with huge upside potential, you should check out the top 20 most popular stocks (view the video below) among hedge funds as many of these stocks already outperformed the market so far in 2019.