Casa Systems, Inc. (NASDAQ:CASA) has seen a decrease in enthusiasm from smart money in recent months. CASA was in 13 hedge funds’ portfolios at the end of the second quarter of 2019. There were 19 hedge funds in our database with CASA holdings at the end of the previous quarter. Our calculations also showed that CASA isn’t among the 30 most popular stocks among hedge funds (see the video below).

At the moment there are several formulas market participants can use to size up publicly traded companies. A couple of the less utilized formulas are hedge fund and insider trading moves. We have shown that, historically, those who follow the best picks of the top fund managers can outclass their index-focused peers by a very impressive margin (see the details here).

What have hedge funds been doing with Casa Systems, Inc. (NASDAQ:CASA)? 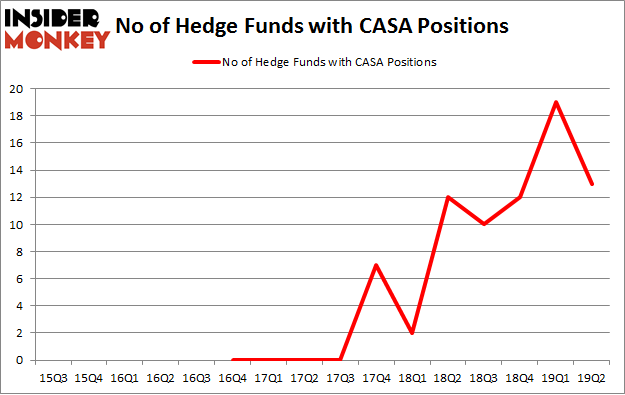 The largest stake in Casa Systems, Inc. (NASDAQ:CASA) was held by AQR Capital Management, which reported holding $4.2 million worth of stock at the end of March. It was followed by D E Shaw with a $4.2 million position. Other investors bullish on the company included Renaissance Technologies, Arrowstreet Capital, and Two Sigma Advisors.

Judging by the fact that Casa Systems, Inc. (NASDAQ:CASA) has witnessed a decline in interest from the entirety of the hedge funds we track, it’s easy to see that there is a sect of hedge funds that elected to cut their positions entirely last quarter. Interestingly, Andrew Feldstein and Stephen Siderow’s Blue Mountain Capital sold off the largest stake of the 750 funds watched by Insider Monkey, totaling about $0.7 million in stock, and Israel Englander’s Millennium Management was right behind this move, as the fund said goodbye to about $0.5 million worth. These bearish behaviors are important to note, as total hedge fund interest dropped by 6 funds last quarter.

As you can see these stocks had an average of 10.5 hedge funds with bullish positions and the average amount invested in these stocks was $61 million. That figure was $21 million in CASA’s case. EZCORP Inc (NASDAQ:EZPW) is the most popular stock in this table. On the other hand Puxin Limited (NYSE:NEW) is the least popular one with only 3 bullish hedge fund positions. Casa Systems, Inc. (NASDAQ:CASA) is not the most popular stock in this group but hedge fund interest is still above average. Our calculations showed that top 20 most popular stocks among hedge funds returned 24.4% in 2019 through September 30th and outperformed the S&P 500 ETF (SPY) by 4 percentage points. Hedge funds were also right about betting on CASA as the stock returned 22.2% during the third quarter and outperformed the market. Hedge funds were rewarded for their relative bullishness.