At the end of February we announced the arrival of the first US recession since 2009 and we predicted that the market will decline by at least 20% in (Recession is Imminent: We Need A Travel Ban NOW). In these volatile markets we scrutinize hedge fund filings to get a reading on which direction each stock might be going. In this article, we will take a closer look at hedge fund sentiment towards Banco de Chile (NYSE:BCH).

Is Banco de Chile (NYSE:BCH) a bargain? The best stock pickers are taking a bearish view. The number of bullish hedge fund bets shrunk by 6 in recent months. Our calculations also showed that BCH isn’t among the 30 most popular stocks among hedge funds (click for Q1 rankings and see the video for a quick look at the top 5 stocks). BCH was in 4 hedge funds’ portfolios at the end of the first quarter of 2020. There were 10 hedge funds in our database with BCH positions at the end of the previous quarter.

At Insider Monkey we leave no stone unturned when looking for the next great investment idea. For example, legendary investor Bill Miller told investors to sell 7 extremely popular recession stocks last month. So, we went through his list and recommended another stock with 100% upside potential instead. We interview hedge fund managers and ask them about their best ideas. If you want to find out the best healthcare stock to buy right now, you can watch our latest hedge fund manager interview here. We read hedge fund investor letters and listen to stock pitches at hedge fund conferences. Our best call in 2020 was shorting the market when S&P 500 was trading at 3150 after realizing the coronavirus pandemic’s significance before most investors. Now let’s view the fresh hedge fund action regarding Banco de Chile (NYSE:BCH). 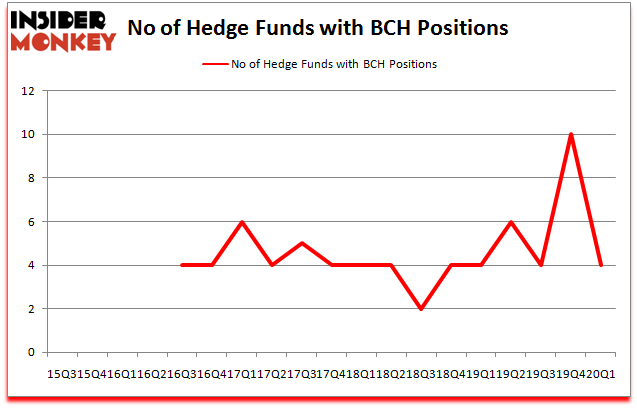 According to Insider Monkey’s hedge fund database, Renaissance Technologies, holds the most valuable position in Banco de Chile (NYSE:BCH). Renaissance Technologies has a $31.9 million position in the stock, comprising less than 0.1%% of its 13F portfolio. The second most bullish fund manager is Cliff Asness of AQR Capital Management, with a $2.5 million position; the fund has less than 0.1%% of its 13F portfolio invested in the stock. Other peers that are bullish encompass D. E. Shaw’s D E Shaw, Paul Marshall and Ian Wace’s Marshall Wace LLP and . In terms of the portfolio weights assigned to each position Renaissance Technologies allocated the biggest weight to Banco de Chile (NYSE:BCH), around 0.03% of its 13F portfolio. AQR Capital Management is also relatively very bullish on the stock, earmarking 0.0043 percent of its 13F equity portfolio to BCH.

Because Banco de Chile (NYSE:BCH) has experienced falling interest from the entirety of the hedge funds we track, it’s safe to say that there was a specific group of hedge funds that decided to sell off their entire stakes by the end of the third quarter. At the top of the heap, Israel Englander’s Millennium Management dropped the largest investment of the “upper crust” of funds followed by Insider Monkey, worth close to $4.1 million in stock. Ken Griffin’s fund, Citadel Investment Group, also cut its stock, about $0.7 million worth. These bearish behaviors are interesting, as total hedge fund interest was cut by 6 funds by the end of the third quarter.

As you can see these stocks had an average of 30.75 hedge funds with bullish positions and the average amount invested in these stocks was $605 million. That figure was $35 million in BCH’s case. Citizens Financial Group Inc (NYSE:CFG) is the most popular stock in this table. On the other hand Shaw Communications Inc (NYSE:SJR) is the least popular one with only 12 bullish hedge fund positions. Compared to these stocks Banco de Chile (NYSE:BCH) is even less popular than SJR. Hedge funds dodged a bullet by taking a bearish stance towards BCH. Our calculations showed that the top 10 most popular hedge fund stocks returned 41.4% in 2019 and outperformed the S&P 500 ETF (SPY) by 10.1 percentage points. These stocks gained 8.3% in 2020 through the end of May but managed to beat the market by 13.2 percentage points. Unfortunately BCH wasn’t nearly as popular as these 10 stocks (hedge fund sentiment was very bearish); BCH investors were disappointed as the stock returned 2.7% during the second quarter (through the end of May) and underperformed the market. If you are interested in investing in large cap stocks with huge upside potential, you should check out the top 10 most popular stocks among hedge funds as most of these stocks already outperformed the market so far in 2020.