Hedge funds and large money managers usually invest with a focus on the long-term horizon and, therefore, short-lived dips on the charts, usually don’t make them change their opinion towards a company. This time it may be different. During the first 6 weeks of the fourth quarter we observed increased volatility and small-cap stocks underperformed the market. Hedge fund investor letters indicated that they are cutting their overall exposure, closing out some position and doubling down on others. Let’s take a look at the hedge fund sentiment towards Alta Mesa Resources, Inc. (NASDAQ:AMR) to find out whether it was one of their high conviction long-term ideas.

Alta Mesa Resources, Inc. (NASDAQ:AMR) investors should pay attention to a decrease in support from the world’s most elite money managers in recent months. AMR was in 20 hedge funds’ portfolios at the end of September. There were 22 hedge funds in our database with AMR positions at the end of the previous quarter. Our calculations also showed that AMR isn’t among the 30 most popular stocks among hedge funds.

According to most stock holders, hedge funds are viewed as underperforming, outdated investment vehicles of the past. While there are over 8,000 funds trading today, We hone in on the upper echelon of this club, about 700 funds. These investment experts shepherd the lion’s share of the smart money’s total asset base, and by paying attention to their matchless stock picks, Insider Monkey has identified numerous investment strategies that have historically outrun the broader indices. Insider Monkey’s flagship hedge fund strategy exceeded the S&P 500 index by 6 percentage points per year since its inception in May 2014 through early November 2018. We were able to generate large returns even by identifying short candidates. Our portfolio of short stocks lost 24% since February 2017 (through December 3rd) even though the market was up nearly 23% during the same period. We just shared a list of 11 short targets in our latest quarterly update.

What does the smart money think about Alta Mesa Resources, Inc. (NASDAQ:AMR)?

Heading into the fourth quarter of 2018, a total of 20 of the hedge funds tracked by Insider Monkey were long this stock, a change of -9% from the previous quarter. Below, you can check out the change in hedge fund sentiment towards AMR over the last 13 quarters. With the smart money’s capital changing hands, there exists a few key hedge fund managers who were adding to their holdings considerably (or already accumulated large positions). 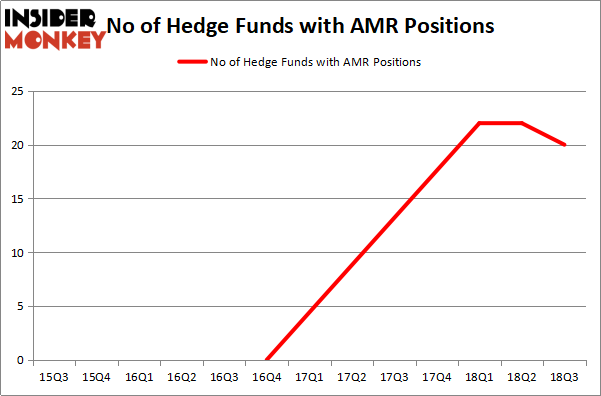 Judging by the fact that Alta Mesa Resources, Inc. (NASDAQ:AMR) has faced bearish sentiment from the entirety of the hedge funds we track, we can see that there exists a select few hedgies that decided to sell off their positions entirely last quarter. At the top of the heap, Bart Baum’s Ionic Capital Management dumped the largest investment of the 700 funds followed by Insider Monkey, totaling an estimated $2.1 million in stock. Steve Cohen’s fund, Point72 Asset Management, also dropped its stock, about $1.1 million worth. These transactions are important to note, as aggregate hedge fund interest was cut by 2 funds last quarter.

As you can see these stocks had an average of 13.75 hedge funds with bullish positions and the average amount invested in these stocks was $63 million. That figure was $222 million in AMR’s case. Baytex Energy Corp (NYSE:BTE) is the most popular stock in this table. On the other hand 0 is the least popular one with only 2 bullish hedge fund positions. Alta Mesa Resources, Inc. (NASDAQ:AMR) is not the most popular stock in this group but hedge fund interest is still above average. This is a slightly positive signal but we’d rather spend our time researching stocks that hedge funds are piling on. In this regard BTE might be a better candidate to consider a long position.