Hedge Funds Are Warming Up To Vale SA (VALE)

We are still in an overall bull market and many stocks that smart money investors were piling into surged through the end of November. Among them, Facebook and Microsoft ranked among the top 3 picks and these stocks gained 54% and 51% respectively. Hedge funds’ top 3 stock picks returned 41.7% this year and beat the S&P 500 ETFs by 14 percentage points. Investing in index funds guarantees you average returns, not superior returns. We are looking to generate superior returns for our readers. That’s why we believe it isn’t a waste of time to check out hedge fund sentiment before you invest in a stock like Vale SA (NYSE:VALE). Currently there are two ETFs with around 10% weights in Vale: VanEck Vectors Steel ETF (NYSE:SLX) and iShares Latin America 40 ETF (NYSE:ILF).

Vale SA (NYSE:VALE) has seen an increase in hedge fund sentiment recently. Our calculations also showed that VALE isn’t among the 30 most popular stocks among hedge funds (click for Q3 rankings and see the video below for Q2 rankings).

At the moment there are a multitude of signals shareholders have at their disposal to evaluate stocks. Some of the most innovative signals are hedge fund and insider trading signals. Our researchers have shown that, historically, those who follow the top picks of the best hedge fund managers can outperform the S&P 500 by a significant margin (see the details here).

Unlike the largest US hedge funds that are convinced Dow will soar past 40,000 or the world’s most bearish hedge fund that’s more convinced than ever that a crash is coming, our long-short investment strategy doesn’t rely on bull or bear markets to deliver double digit returns. We only rely on the best performing hedge funds‘ buy/sell signals. Let’s check out the recent hedge fund action surrounding Vale SA (NYSE:VALE).

What does smart money think about Vale SA (NYSE:VALE)?

At Q3’s end, a total of 28 of the hedge funds tracked by Insider Monkey held long positions in this stock, a change of 33% from one quarter earlier. By comparison, 35 hedge funds held shares or bullish call options in VALE a year ago. With hedgies’ capital changing hands, there exists a select group of noteworthy hedge fund managers who were boosting their holdings substantially (or already accumulated large positions). 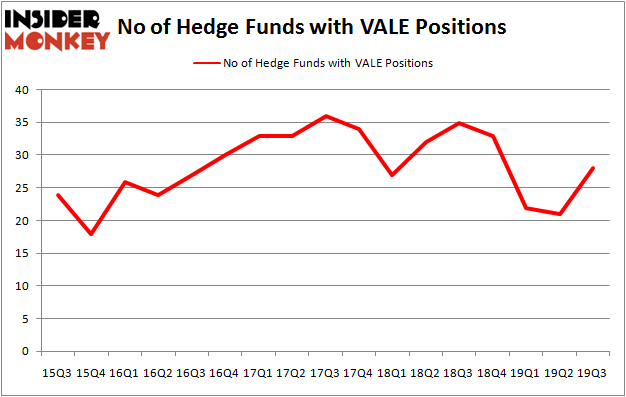 Among these funds, Fisher Asset Management held the most valuable stake in Vale SA (NYSE:VALE), which was worth $385.3 million at the end of the third quarter. On the second spot was Orbis Investment Management which amassed $383.8 million worth of shares. Renaissance Technologies, Contrarian Capital, and Citadel Investment Group were also very fond of the stock, becoming one of the largest hedge fund holders of the company. In terms of the portfolio weights assigned to each position Contrarian Capital allocated the biggest weight to Vale SA (NYSE:VALE), around 10.67% of its portfolio. Orbis Investment Management is also relatively very bullish on the stock, designating 2.84 percent of its 13F equity portfolio to VALE.

As aggregate interest increased, some big names were breaking ground themselves. Adage Capital Management, managed by Phill Gross and Robert Atchinson, assembled the largest position in Vale SA (NYSE:VALE). Adage Capital Management had $23 million invested in the company at the end of the quarter. Todd J. Kantor’s Encompass Capital Advisors also made a $8.1 million investment in the stock during the quarter. The other funds with brand new VALE positions are Jonathan Barrett and Paul Segal’s Luminus Management, David Kowitz and Sheldon Kasowitz’s Indus Capital, and Benjamin A. Smith’s Laurion Capital Management.

Let’s now take a look at hedge fund activity in other stocks – not necessarily in the same industry as Vale SA (NYSE:VALE) but similarly valued. We will take a look at The Blackstone Group Inc. (NYSE:BX), Crown Castle International Corp. (REIT) (NYSE:CCI), CIGNA Corporation (NYSE:CI), and Ecolab Inc. (NYSE:ECL). This group of stocks’ market valuations are similar to VALE’s market valuation.

As you can see these stocks had an average of 43.75 hedge funds with bullish positions and the average amount invested in these stocks was $2168 million. That figure was $1454 million in VALE’s case. CIGNA Corporation (NYSE:CI) is the most popular stock in this table. On the other hand Crown Castle International Corp. (REIT) (NYSE:CCI) is the least popular one with only 34 bullish hedge fund positions. Compared to these stocks Vale SA (NYSE:VALE) is even less popular than CCI. Hedge funds dodged a bullet by taking a bearish stance towards VALE. Our calculations showed that the top 20 most popular hedge fund stocks returned 37.4% in 2019 through the end of November and outperformed the S&P 500 ETF (SPY) by 9.9 percentage points. Unfortunately VALE wasn’t nearly as popular as these 20 stocks (hedge fund sentiment was very bearish); VALE investors were disappointed as the stock returned 2.3% during the fourth quarter (through the end of November) and underperformed the market. If you are interested in investing in large cap stocks with huge upside potential, you should check out the top 20 most popular stocks among hedge funds as 70 percent of these stocks already outperformed the market so far in Q4.

5 Best Smartphones with A Headphone Jack In 2019
Monthly Newsletter Strategy
Download a free copy of our newsletter and see the details inside!
Hedge Fund Resource Center
Related News
Is Vale SA (VALE) A Good Stock To Buy? Were Hedge Funds Right About Deserting Vale SA (VALE)? Hedge Funds Are Digging Shares of This Mining Company Right Now Billionaire Ken Fisher is Bullish About These Dividend Stocks Peabody Energy Corporation (BTU), Vale SA (ADR) (VALE): Contrarian Capital Scored Big Betting on These Stocks Vale SA (ADR) (VALE), Diamond Offshore Drilling Inc (DO): What This Highly Bearish Fund Is Betting On? 33 Key Stories to Find Out What’s Happening in the Finance World Today 5 Best Smartphones with A Headphone Jack In 2019 10 Easiest Instruments To Learn For A Child Top 10 Best Places For A Single Mom To Live And Work In 2020
Billionaire Hedge Funds