Hedge Funds Are Warming Up To Luxfer Holdings PLC (LXFR)

“Since 2006, value stocks (IVE vs IVW) have underperformed 11 of the 13 calendar years and when they beat growth, it wasn’t by much. Cumulatively, through this week, it has been a 122% differential (up 52% for value vs up 174% for growth). This appears to be the longest and most severe drought for value investors since data collection began. It will go our way eventually as there are too many people paying far too much for today’s darlings, both public and private. Further, the ten-year yield of 2.5% (pre-tax) isn’t attractive nor is real estate. We believe the value part of the global equity market is the only place to earn solid risk adjusted returns and we believe those returns will be higher than normal,” said Vilas Fund in its Q1 investor letter. We aren’t sure whether value stocks outperform growth, but we follow hedge fund investor letters to understand where the markets and stocks might be going. That’s why we believe it would be worthwhile to take a look at the hedge fund sentiment on Luxfer Holdings PLC (NYSE:LXFR) in order to identify whether reputable and successful top money managers continue to believe in its potential.

Luxfer Holdings PLC (NYSE:LXFR) shareholders have witnessed an increase in hedge fund sentiment of late. LXFR was in 11 hedge funds’ portfolios at the end of the third quarter of 2019. There were 9 hedge funds in our database with LXFR positions at the end of the previous quarter. Our calculations also showed that LXFR isn’t among the 30 most popular stocks among hedge funds (click for Q3 rankings and see the video below for Q2 rankings).

If you’d ask most market participants, hedge funds are viewed as underperforming, old investment vehicles of the past. While there are over 8000 funds trading today, Our experts look at the top tier of this club, around 750 funds. It is estimated that this group of investors preside over the majority of all hedge funds’ total asset base, and by following their highest performing investments, Insider Monkey has spotted many investment strategies that have historically surpassed the market. Insider Monkey’s flagship short hedge fund strategy surpassed the S&P 500 short ETFs by around 20 percentage points annually since its inception in May 2014. Our portfolio of short stocks lost 27.8% since February 2017 (through November 21st) even though the market was up more than 39% during the same period. We just shared a list of 7 short targets in our latest quarterly update .

We leave no stone unturned when looking for the next great investment idea. For example Discover is offering this insane cashback card, so we look into shorting the stock. One of the most bullish analysts in America just put his money where his mouth is. He says, “I’m investing more today than I did back in early 2009.” So we check out his pitch. We read hedge fund investor letters and listen to stock pitches at hedge fund conferences. We even check out this option genius’ weekly trade ideas. This December we recommended Adams Energy  based on an under-the-radar fund manager’s investor letter and the stock gained 20 percent. Let’s analyze the recent hedge fund action regarding Luxfer Holdings PLC (NYSE:LXFR).

What have hedge funds been doing with Luxfer Holdings PLC (NYSE:LXFR)? 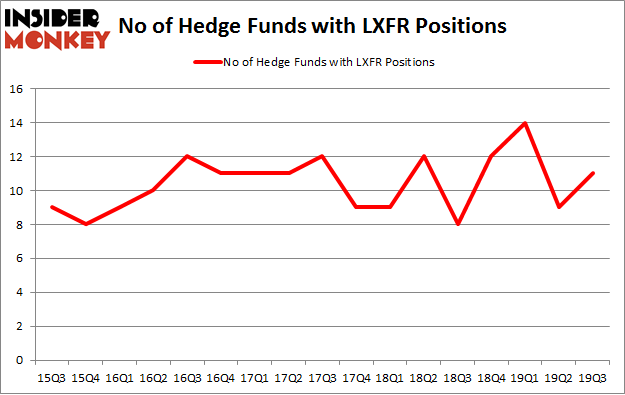 The largest stake in Luxfer Holdings PLC (NYSE:LXFR) was held by Nantahala Capital Management, which reported holding $40.5 million worth of stock at the end of September. It was followed by Renaissance Technologies with a $8.7 million position. Other investors bullish on the company included Trigran Investments, Royce & Associates, and Ancora Advisors. In terms of the portfolio weights assigned to each position Nantahala Capital Management allocated the biggest weight to Luxfer Holdings PLC (NYSE:LXFR), around 1.5% of its 13F portfolio. Trigran Investments is also relatively very bullish on the stock, designating 1.02 percent of its 13F equity portfolio to LXFR.

Consequently, key money managers have been driving this bullishness. Trigran Investments, managed by Douglas T. Granat, established the largest position in Luxfer Holdings PLC (NYSE:LXFR). Trigran Investments had $5.4 million invested in the company at the end of the quarter. Israel Englander’s Millennium Management also made a $2.2 million investment in the stock during the quarter. The other funds with brand new LXFR positions are James Dondero’s Highland Capital Management, Michael Gelband’s ExodusPoint Capital, and Cliff Asness’s AQR Capital Management.

As you can see these stocks had an average of 17 hedge funds with bullish positions and the average amount invested in these stocks was $88 million. That figure was $67 million in LXFR’s case. CONSOL Energy Inc. (NYSE:CEIX) is the most popular stock in this table. On the other hand Precision BioSciences, Inc. (NASDAQ:DTIL) is the least popular one with only 13 bullish hedge fund positions. Compared to these stocks Luxfer Holdings PLC (NYSE:LXFR) is even less popular than DTIL. Hedge funds clearly dropped the ball on LXFR as the stock delivered strong returns, though hedge funds’ consensus picks still generated respectable returns. Our calculations showed that top 20 most popular stocks among hedge funds returned 37.4% in 2019 through the end of November and outperformed the S&P 500 ETF (SPY) by 9.9 percentage points. A small number of hedge funds were also right about betting on LXFR as the stock returned 13% during the fourth quarter (through the end of November) and outperformed the market by an even larger margin.