Hedge Funds Are Warming Up To Brighthouse Financial, Inc. (BHF)

As we already know from media reports and hedge fund investor letters, hedge funds delivered their best returns in a decade. Most investors who decided to stick with hedge funds after a rough 2018 recouped their losses by the end of the third quarter. We get to see hedge funds’ thoughts towards the market and individual stocks by aggregating their quarterly portfolio movements and reading their investor letters. In this article, we will particularly take a look at what hedge funds think about Brighthouse Financial, Inc. (NASDAQ:BHF).

Brighthouse Financial, Inc. (NASDAQ:BHF) has experienced an increase in activity from the world’s largest hedge funds in recent months. Our calculations also showed that BHF isn’t among the 30 most popular stocks among hedge funds (click for Q3 rankings and see the video below for Q2 rankings).

Unlike the largest US hedge funds that are convinced Dow will soar past 40,000 or the world’s most bearish hedge fund that’s more convinced than ever that a crash is coming, our long-short investment strategy doesn’t rely on bull or bear markets to deliver double digit returns. We only rely on the best performing hedge funds‘ buy/sell signals. Let’s take a peek at the key hedge fund action encompassing Brighthouse Financial, Inc. (NASDAQ:BHF).

What does smart money think about Brighthouse Financial, Inc. (NASDAQ:BHF)? 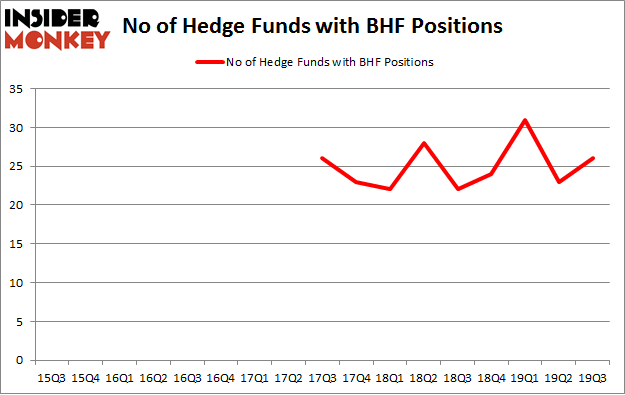 Of the funds tracked by Insider Monkey, Greenlight Capital, managed by David Einhorn, holds the biggest position in Brighthouse Financial, Inc. (NASDAQ:BHF). Greenlight Capital has a $144.6 million position in the stock, comprising 10.4% of its 13F portfolio. On Greenlight Capital’s heels is Bill Miller of Miller Value Partners, with a $92.6 million position; the fund has 3.7% of its 13F portfolio invested in the stock. Other peers that hold long positions comprise Cliff Asness’s AQR Capital Management, Peter Rathjens, Bruce Clarke and John Campbell’s Arrowstreet Capital and Ric Dillon’s Diamond Hill Capital. In terms of the portfolio weights assigned to each position Greenlight Capital allocated the biggest weight to Brighthouse Financial, Inc. (NASDAQ:BHF), around 10.41% of its portfolio. Elm Ridge Capital is also relatively very bullish on the stock, designating 3.84 percent of its 13F equity portfolio to BHF.

With a general bullishness amongst the heavyweights, some big names have been driving this bullishness. EJF Capital, managed by Emanuel J. Friedman, initiated the most outsized position in Brighthouse Financial, Inc. (NASDAQ:BHF). EJF Capital had $13.7 million invested in the company at the end of the quarter. Brandon Haley’s Holocene Advisors also initiated a $1.1 million position during the quarter. The other funds with new positions in the stock are Michael Platt and William Reeves’s BlueCrest Capital Mgmt., Peter Algert and Kevin Coldiron’s Algert Coldiron Investors, and Jay Petschek and Steven Major’s Corsair Capital Management.

As you can see these stocks had an average of 18.25 hedge funds with bullish positions and the average amount invested in these stocks was $221 million. That figure was $529 million in BHF’s case. Marriott Vacations Worldwide Corporation (NYSE:VAC) is the most popular stock in this table. On the other hand Aurora Cannabis Inc. (NYSE:ACB) is the least popular one with only 10 bullish hedge fund positions. Brighthouse Financial, Inc. (NASDAQ:BHF) is not the most popular stock in this group but hedge fund interest is still above average. This is a slightly positive signal but we’d rather spend our time researching stocks that hedge funds are piling on. Our calculations showed that top 20 most popular stocks among hedge funds returned 37.4% in 2019 through the end of November and outperformed the S&P 500 ETF (SPY) by 9.9 percentage points. Unfortunately BHF wasn’t nearly as popular as these 20 stocks and hedge funds that were betting on BHF were disappointed as the stock returned 1.7% during the fourth quarter (through the end of November) and underperformed the market. If you are interested in investing in large cap stocks with huge upside potential, you should check out the top 20 most popular stocks among hedge funds as many of these stocks already outperformed the market so far this year.