A whopping number of 13F filings filed with the U.S. Securities and Exchange Commission has been processed by Insider Monkey so that individual investors can look at the overall hedge fund sentiment towards the stocks included in their watchlists. These freshly-submitted public filings disclose money managers’ equity positions as of the end of the three-month period that ended June 30, so let’s proceed with the discussion of the hedge fund sentiment on VF Corp (NYSE:VFC).

Hedge funds have remained cautious while VF Corp goes through a transition phase that has seen it sell off two of its iconic brands, Wrangler and Lee. 24 hedge funds owned the stock on June 30, up from 23 on March 31. Several prominent funds opened positions in VFC during Q2, including Ray Dalio’s Bridgewater Associates (72,088 shares) and Paul Tudor Jones’ Tudor Investment Corp (53,495 shares). Two members of VF Corp’s board of directors purchased shares recently as well, landing the company on our list of The 25 Biggest Insider Purchases in October. VF Corp (NYSE:VFC) has surged over the past couple of weeks after sliding by nearly 20% between September 24 and October 15.

To most investors, hedge funds are seen as slow, old investment vehicles of the past. While there are greater than 8000 funds with their doors open at the moment, Our researchers hone in on the elite of this group, about 700 funds. These investment experts command the majority of the smart money’s total capital, and by tracking their inimitable investments, Insider Monkey has formulated a few investment strategies that have historically defeated the broader indices. Insider Monkey’s small-cap hedge fund strategy surpassed the S&P 500 index by 12 percentage points per annum for a decade in their back tests.

How have hedgies been trading VF Corp (NYSE:VFC) ?

Heading into the fourth quarter of 2018, a total of 24 of the hedge funds tracked by Insider Monkey were bullish on this stock, a 4% rise from one quarter earlier. By comparison, 17 hedge funds held shares or bullish call options in VFC heading into this year. With the smart money’s sentiment swirling, there exists a few notable hedge fund managers who were increasing their stakes significantly (or already accumulated large positions). 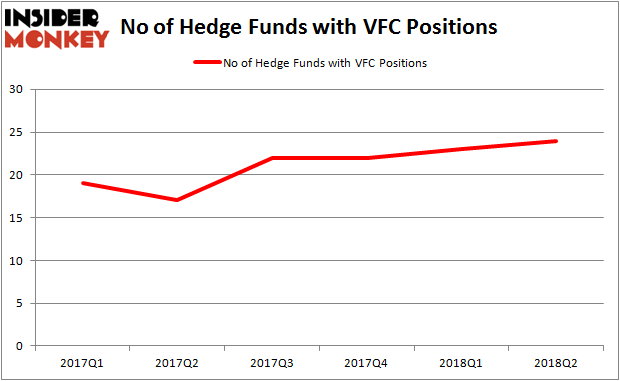 Arrowstreet Capital was the largest shareholder of VF Corp (NYSE:VFC), with a stake worth $327 million reported as of the end of June. Trailing Arrowstreet Capital was Diamond Hill Capital, which amassed a stake valued at $290.4 million. Stevens Capital Management, Shellback Capital, and Ascend Capital were also very fond of the stock, giving the stock large weights in their 13F portfolios.

As you can see these stocks had an average of 37 hedge funds with bullish positions and the average amount invested in these stocks was $1.81 billion. That figure was $976 million in VFC’s case. Marathon Petroleum Corp (NYSE:MPC) is the most popular stock in this table. On the other hand Ross Stores, Inc. (NASDAQ:ROST) is the least popular one with only 27 bullish hedge fund positions. Compared to these stocks VF Corp (NYSE:VFC)  is even less popular than ROST. While hedge funds aren’t overly fond of this stock in relation to other companies analyzed in this article, the price depreciation and insider buying are signs that it could be worth a look.