The latest 13F reporting period has come and gone, and Insider Monkey is again at the forefront when it comes to making use of this gold mine of data. Insider Monkey finished processing more than 730 13F filings submitted by hedge funds and prominent investors. These filings show these funds’ portfolio positions as of June 28th, 2019. What do these smart investors think about Entergy Corporation (NYSE:ETR)?

Entergy Corporation (NYSE:ETR) has experienced a decrease in enthusiasm from smart money of late. ETR was in 30 hedge funds’ portfolios at the end of the second quarter of 2019. There were 33 hedge funds in our database with ETR positions at the end of March when overall hedge fund sentiment towards ETR reached its all time high. Our calculations also showed that ETR isn’t among the 30 most popular stocks among hedge funds.

In the eyes of most shareholders, hedge funds are assumed to be worthless, outdated investment tools of years past. While there are over 8000 funds trading at the moment, Our researchers choose to focus on the top tier of this club, around 750 funds. Most estimates calculate that this group of people orchestrate the majority of all hedge funds’ total capital, and by shadowing their unrivaled equity investments, Insider Monkey has determined a number of investment strategies that have historically exceeded Mr. Market. Insider Monkey’s flagship hedge fund strategy outrun the S&P 500 index by around 5 percentage points a year since its inception in May 2014. We were able to generate large returns even by identifying short candidates. Our portfolio of short stocks lost 25.7% since February 2017 (through September 30th) even though the market was up more than 33% during the same period. We just shared a list of 10 short targets in our latest quarterly update .

Unlike some fund managers who are betting on Dow reaching 40000 in a year, our long-short investment strategy doesn’t rely on bull markets to deliver double digit returns. We only rely on hedge fund buy/sell signals. We’re going to review the fresh hedge fund action surrounding Entergy Corporation (NYSE:ETR).

At Q2’s end, a total of 30 of the hedge funds tracked by Insider Monkey held long positions in this stock, a change of -9% from the first quarter of 2019. The graph below displays the number of hedge funds with bullish position in ETR over the last 16 quarters. With hedgies’ capital changing hands, there exists a few noteworthy hedge fund managers who were upping their holdings meaningfully (or already accumulated large positions). 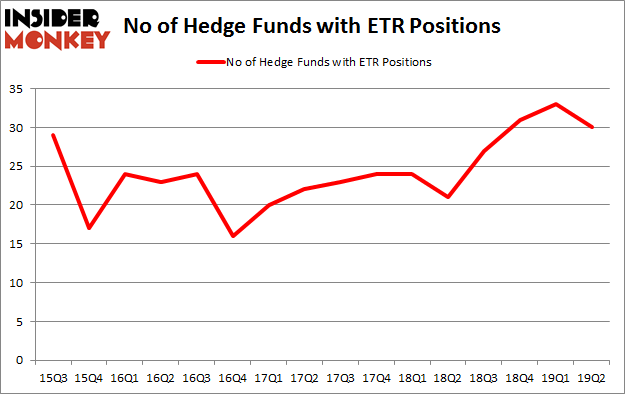 Of the funds tracked by Insider Monkey, Renaissance Technologies has the most valuable position in Entergy Corporation (NYSE:ETR), worth close to $444.5 million, corresponding to 0.4% of its total 13F portfolio. On Renaissance Technologies’s heels is Millennium Management, managed by Israel Englander, which holds a $164.7 million position; the fund has 0.2% of its 13F portfolio invested in the stock. Remaining hedge funds and institutional investors that are bullish comprise Phill Gross and Robert Atchinson’s Adage Capital Management, Jonathan Barrett and Paul Segal’s Luminus Management and Ken Griffin’s Citadel Investment Group.

Because Entergy Corporation (NYSE:ETR) has faced declining sentiment from the smart money, logic holds that there lies a certain “tier” of hedge funds that decided to sell off their full holdings last quarter. At the top of the heap, Bruce Kovner’s Caxton Associates LP sold off the biggest investment of all the hedgies monitored by Insider Monkey, worth an estimated $8.8 million in stock. Matthew Tewksbury’s fund, Stevens Capital Management, also dumped its stock, about $1.5 million worth. These bearish behaviors are important to note, as aggregate hedge fund interest fell by 3 funds last quarter.

As you can see these stocks had an average of 28.75 hedge funds with bullish positions and the average amount invested in these stocks was $1171 million. That figure was $1492 million in ETR’s case. CoStar Group Inc (NASDAQ:CSGP) is the most popular stock in this table. On the other hand Aptiv PLC (NYSE:APTV) is the least popular one with only 26 bullish hedge fund positions. Entergy Corporation (NYSE:ETR) is not the most popular stock in this group but hedge fund interest is still above average. Our calculations showed that top 20 most popular stocks (see the video below) among hedge funds returned 24.4% in 2019 through September 30th and outperformed the S&P 500 ETF (SPY) by 4 percentage points. Hedge funds were also right about betting on ETR as the stock returned 15% during the third quarter and outperformed the market. Hedge funds were rewarded for their relative bullishness.