As we already know from media reports and hedge fund investor letters, hedge funds delivered their best returns in a decade. Most investors who decided to stick with hedge funds after a rough 2018 recouped their losses by the end of the third quarter. We get to see hedge funds’ thoughts towards the market and individual stocks by aggregating their quarterly portfolio movements and reading their investor letters. In this article, we will particularly take a look at what hedge funds think about Lululemon Athletica inc. (NASDAQ:LULU).

Lululemon Athletica inc. (NASDAQ:LULU) has seen a slight decrease in support from the world’s most elite money managers in recent months. LULU was in 46 hedge funds’ portfolios at the end of September. There were 49 hedge funds in our database with LULU positions at the end of the previous quarter. Our calculations also showed that LULU isn’t among the 30 most popular stocks among hedge funds.

Unlike the largest US hedge funds that are convinced Dow will soar past 40,000 or the world’s most bearish hedge fund that’s more convinced than ever that a crash is coming, our long-short investment strategy doesn’t rely on bull or bear markets to deliver double digit returns. We only rely on the best performing hedge funds‘ buy/sell signals. Let’s go over the latest hedge fund action encompassing Lululemon Athletica inc. (NASDAQ:LULU).

What have hedge funds been doing with Lululemon Athletica inc. (NASDAQ:LULU)?

At Q3’s end, a total of 46 of the hedge funds tracked by Insider Monkey were long this stock, a change of -6% from the second quarter of 2019. On the other hand, there were a total of 45 hedge funds with a bullish position in LULU a year ago. With the smart money’s capital changing hands, there exists an “upper tier” of noteworthy hedge fund managers who were boosting their holdings significantly (or already accumulated large positions). 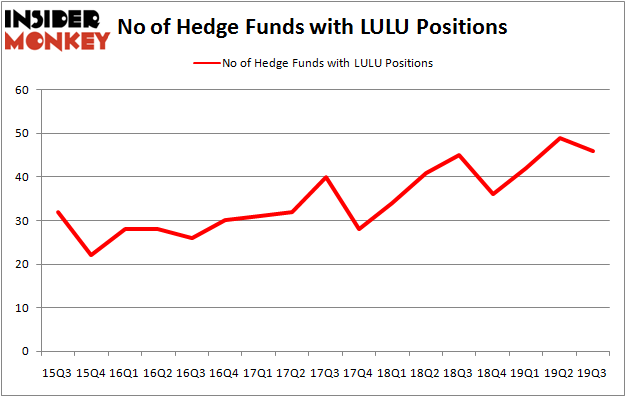 The largest stake in Lululemon Athletica inc. (NASDAQ:LULU) was held by D E Shaw, which reported holding $227.5 million worth of stock at the end of September. It was followed by Melvin Capital Management with a $154 million position. Other investors bullish on the company included AQR Capital Management, Arrowstreet Capital, and Renaissance Technologies. In terms of the portfolio weights assigned to each position North Fourth Asset Management allocated the biggest weight to Lululemon Athletica inc. (NASDAQ:LULU), around 4.09% of its portfolio. Stormborn Capital Management is also relatively very bullish on the stock, earmarking 3.04 percent of its 13F equity portfolio to LULU.

Seeing as Lululemon Athletica inc. (NASDAQ:LULU) has experienced bearish sentiment from the aggregate hedge fund industry, we can see that there is a sect of money managers that elected to cut their positions entirely last quarter. Intriguingly, Leon Shaulov’s Maplelane Capital said goodbye to the largest stake of the “upper crust” of funds monitored by Insider Monkey, comprising close to $21.6 million in stock, and Simon Sadler’s Segantii Capital was right behind this move, as the fund sold off about $11.7 million worth. These transactions are interesting, as total hedge fund interest fell by 3 funds last quarter.

As you can see these stocks had an average of 28.25 hedge funds with bullish positions and the average amount invested in these stocks was $1225 million. That figure was $1527 million in LULU’s case. FleetCor Technologies, Inc. (NYSE:FLT) is the most popular stock in this table. On the other hand Realty Income Corporation (NYSE:O) is the least popular one with only 16 bullish hedge fund positions. Compared to these stocks Lululemon Athletica inc. (NASDAQ:LULU) is more popular among hedge funds. Our calculations showed that top 20 most popular stocks among hedge funds returned 34.7% in 2019 through November 22nd and outperformed the S&P 500 ETF (SPY) by 8.5 percentage points. Hedge funds were also right about betting on LULU as the stock returned 14.2% during Q4 (through 11/22) and outperformed the market by an even larger margin. Hedge funds were clearly right about piling into this stock relative to other stocks with similar market capitalizations.