Is AMAG Pharmaceuticals, Inc. (NASDAQ:AMAG) a buy, sell, or hold? Hedge funds cashed out of AMAG during the second quarter. The number of bullish hedge fund positions fell by 2 in recent months. Our calculations also showed that AMAG isn’t among the 30 most popular stocks among hedge funds (see the video below). AMAG was in 17 hedge funds’ portfolios at the end of June. There were 19 hedge funds in our database with AMAG positions at the end of the previous quarter. This was all before Caligan Partners launched its activist campaign. We are going to get to see how hedge funds traded AMAG during Q3 in one week and publish an updated version of this article. 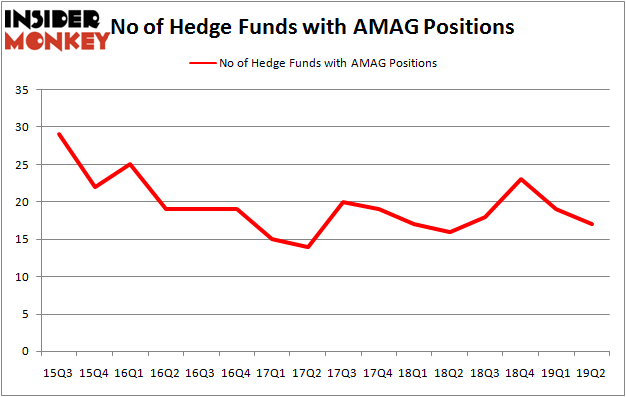 Unlike other investors who track every movement of the 25 largest hedge funds, our long-short investment strategy relies on hedge fund buy/sell signals given by the 100 best performing hedge funds. Let’s go over the key hedge fund action regarding AMAG Pharmaceuticals, Inc. (NASDAQ:AMAG).

What have hedge funds been doing with AMAG Pharmaceuticals, Inc. (NASDAQ:AMAG)?

More specifically, Armistice Capital was the largest shareholder of AMAG Pharmaceuticals, Inc. (NASDAQ:AMAG), with a stake worth $38 million reported as of the end of March. Trailing Armistice Capital was Palo Alto Investors, which amassed a stake valued at $33.7 million. Camber Capital Management, Renaissance Technologies, and D E Shaw were also very fond of the stock, giving the stock large weights in their portfolios.

Since AMAG Pharmaceuticals, Inc. (NASDAQ:AMAG) has witnessed bearish sentiment from the aggregate hedge fund industry, logic holds that there were a few money managers that elected to cut their entire stakes heading into Q3. It’s worth mentioning that Michael Johnston’s Steelhead Partners said goodbye to the biggest stake of all the hedgies monitored by Insider Monkey, worth about $14.8 million in stock. Noam Gottesman’s fund, GLG Partners, also sold off its stock, about $2.3 million worth. These transactions are intriguing to say the least, as total hedge fund interest dropped by 2 funds heading into Q3.

As you can see these stocks had an average of 5.75 hedge funds with bullish positions and the average amount invested in these stocks was $26 million. That figure was $145 million in AMAG’s case. Carriage Services, Inc. (NYSE:CSV) is the most popular stock in this table. On the other hand Willis Lease Finance Corporation (NASDAQ:WLFC) is the least popular one with only 3 bullish hedge fund positions. Compared to these stocks AMAG Pharmaceuticals, Inc. (NASDAQ:AMAG) is more popular among hedge funds. Our calculations showed that top 20 most popular stocks among hedge funds returned 24.4% in 2019 through September 30th and outperformed the S&P 500 ETF (SPY) by 4 percentage points. Hedge funds were also right about betting on AMAG as the stock returned 15.6% during Q3 and outperformed the market by an even larger margin. Hedge funds were clearly right about piling into this stock relative to other stocks with similar market capitalizations.