World Wrestling Entertainment, Inc. (NYSE:WWE) has seen a decrease in hedge fund interest recently. WWE was in 39 hedge funds’ portfolios at the end of the second quarter of 2019. There were 47 hedge funds in our database with WWE positions at the end of the previous quarter. Our calculations also showed that WWE isn’t among the 30 most popular stocks among hedge funds (view the video below).

How have hedgies been trading World Wrestling Entertainment, Inc. (NYSE:WWE)? 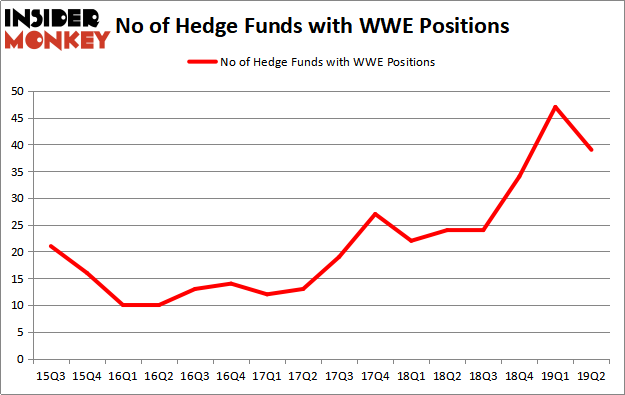 According to Insider Monkey’s hedge fund database, Stephen Mandel’s Lone Pine Capital has the number one position in World Wrestling Entertainment, Inc. (NYSE:WWE), worth close to $194.4 million, accounting for 1.2% of its total 13F portfolio. Coming in second is Renaissance Technologies holding a $177.7 million position; 0.2% of its 13F portfolio is allocated to the stock. Some other hedge funds and institutional investors that are bullish consist of Ken Griffin’s Citadel Investment Group, Robert Boucai’s Newbrook Capital Advisors and Glen Kacher’s Light Street Capital.

Judging by the fact that World Wrestling Entertainment, Inc. (NYSE:WWE) has experienced bearish sentiment from the entirety of the hedge funds we track, we can see that there exists a select few fund managers that slashed their full holdings last quarter. Interestingly, Robert Pohly’s Samlyn Capital cut the largest investment of all the hedgies watched by Insider Monkey, worth close to $58.6 million in stock, and George Soros’s Soros Fund Management was right behind this move, as the fund said goodbye to about $28.2 million worth. These bearish behaviors are important to note, as total hedge fund interest fell by 8 funds last quarter.

As you can see these stocks had an average of 19.75 hedge funds with bullish positions and the average amount invested in these stocks was $409 million. That figure was $978 million in WWE’s case. Parsley Energy Inc (NYSE:PE) is the most popular stock in this table. On the other hand James Hardie Industries plc (NYSE:JHX) is the least popular one with only 2 bullish hedge fund positions. Compared to these stocks World Wrestling Entertainment, Inc. (NYSE:WWE) is more popular among hedge funds. Our calculations showed that top 20 most popular stocks among hedge funds returned 24.4% in 2019 through September 30th and outperformed the S&P 500 ETF (SPY) by 4 percentage points. Unfortunately WWE wasn’t nearly as popular as these 20 stocks and hedge funds that were betting on WWE were disappointed as the stock returned -1.3% during the third quarter and underperformed the market. If you are interested in investing in large cap stocks with huge upside potential, you should check out the top 20 most popular stocks among hedge funds as many of these stocks already outperformed the market in Q3.