The latest 13F reporting period has come and gone, and Insider Monkey is again at the forefront when it comes to making use of this gold mine of data. We at Insider Monkey have gone over 730 13F filings that hedge funds and well-known value investors are required to file by the SEC. The 13F filings show the funds’ and investors’ portfolio positions as of June 28th. In this article we look at what those investors think of Williams-Sonoma, Inc. (NYSE:WSM).

Williams-Sonoma, Inc. (NYSE:WSM) was in 27 hedge funds’ portfolios at the end of June. WSM has seen a decrease in activity from the world’s largest hedge funds of late. There were 29 hedge funds in our database with WSM positions at the end of the previous quarter. Our calculations also showed that WSM isn’t among the 30 most popular stocks among hedge funds.

Unlike some fund managers who are betting on Dow reaching 40000 in a year, our long-short investment strategy doesn’t rely on bull markets to deliver double digit returns. We only rely on hedge fund buy/sell signals. Let’s review the recent hedge fund action encompassing Williams-Sonoma, Inc. (NYSE:WSM).

At Q2’s end, a total of 27 of the hedge funds tracked by Insider Monkey were bullish on this stock, a change of -7% from one quarter earlier. The graph below displays the number of hedge funds with bullish position in WSM over the last 16 quarters. With hedge funds’ positions undergoing their usual ebb and flow, there exists a few notable hedge fund managers who were upping their stakes substantially (or already accumulated large positions). 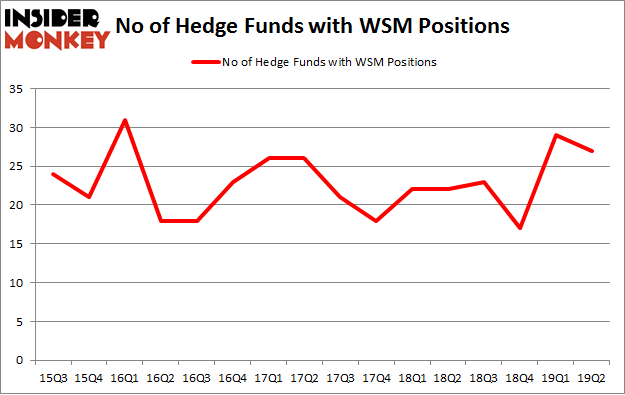 Of the funds tracked by Insider Monkey, AQR Capital Management, managed by Cliff Asness, holds the biggest position in Williams-Sonoma, Inc. (NYSE:WSM). AQR Capital Management has a $121.1 million position in the stock, comprising 0.1% of its 13F portfolio. Sitting at the No. 2 spot is Robert Joseph Caruso of Select Equity Group, with a $52.8 million position; 0.4% of its 13F portfolio is allocated to the company. Other professional money managers with similar optimism consist of Dmitry Balyasny’s Balyasny Asset Management, D. E. Shaw’s D E Shaw and Ken Griffin’s Citadel Investment Group.

Due to the fact that Williams-Sonoma, Inc. (NYSE:WSM) has faced bearish sentiment from the entirety of the hedge funds we track, it’s easy to see that there is a sect of fund managers that elected to cut their positions entirely last quarter. At the top of the heap, Peter Rathjens, Bruce Clarke and John Campbell’s Arrowstreet Capital dumped the biggest position of the “upper crust” of funds watched by Insider Monkey, comprising an estimated $24.2 million in stock. Michael Price’s fund, MFP Investors, also dumped its stock, about $3.1 million worth. These transactions are intriguing to say the least, as total hedge fund interest dropped by 2 funds last quarter.

As you can see these stocks had an average of 18.5 hedge funds with bullish positions and the average amount invested in these stocks was $357 million. That figure was $305 million in WSM’s case. Crane Co. (NYSE:CR) is the most popular stock in this table. On the other hand Turkcell Iletisim Hizmetleri A.S. (NYSE:TKC) is the least popular one with only 7 bullish hedge fund positions. Compared to these stocks Williams-Sonoma, Inc. (NYSE:WSM) is more popular among hedge funds. Our calculations showed that top 20 most popular stocks (view the video below) among hedge funds returned 24.4% in 2019 through September 30th and outperformed the S&P 500 ETF (SPY) by 4 percentage points. Hedge funds were also right about betting on WSM, though not to the same extent, as the stock returned 5.3% during the third quarter and outperformed the market as well.