WildHorse Resource Development Corporation (NYSE:WRD) was in 20 hedge funds’ portfolios at the end of September. WRD investors should be aware of a decrease in support from the world’s most elite money managers in recent months. There were 25 hedge funds in our database with WRD positions at the end of the previous quarter. Our calculations also showed that WRD isn’t among the 30 most popular stocks among hedge funds.

At the end of the third quarter, a total of 20 of the hedge funds tracked by Insider Monkey were long this stock, a change of -20% from the previous quarter. Below, you can check out the change in hedge fund sentiment towards WRD over the last 13 quarters. With hedge funds’ capital changing hands, there exists a select group of notable hedge fund managers who were upping their holdings meaningfully (or already accumulated large positions). 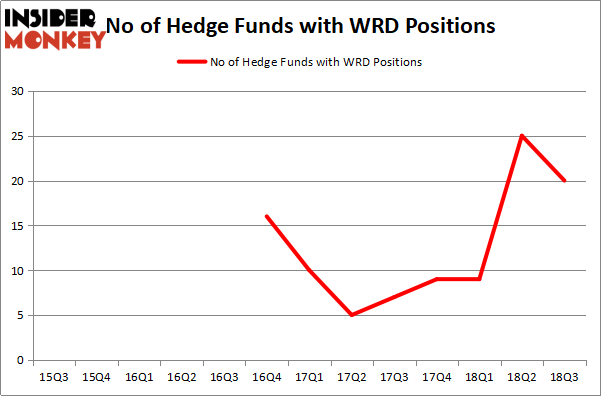 According to publicly available hedge fund and institutional investor holdings data compiled by Insider Monkey, Steve Cohen’s Point72 Asset Management has the most valuable position in WildHorse Resource Development Corporation (NYSE:WRD), worth close to $14.7 million, comprising 0.1% of its total 13F portfolio. Coming in second is David Keidan of Buckingham Capital Management, with a $14.3 million position; the fund has 1.5% of its 13F portfolio invested in the stock. Some other peers that hold long positions comprise Brett Hendrickson’s Nokomis Capital, Wayne Cooperman’s Cobalt Capital Management and D. E. Shaw’s D E Shaw.

Since WildHorse Resource Development Corporation (NYSE:WRD) has faced a decline in interest from the smart money, we can see that there were a few hedgies that slashed their positions entirely in the third quarter. At the top of the heap, John Labanowski’s Brenham Capital Management dumped the largest stake of the “upper crust” of funds watched by Insider Monkey, comprising an estimated $42.6 million in stock, and Dmitry Balyasny’s Balyasny Asset Management was right behind this move, as the fund said goodbye to about $19.6 million worth. These moves are intriguing to say the least, as total hedge fund interest fell by 5 funds in the third quarter.

As you can see these stocks had an average of 19.25 hedge funds with bullish positions and the average amount invested in these stocks was $374 million. That figure was $99 million in WRD’s case. Plantronics, Inc. (NYSE:PLT) is the most popular stock in this table. On the other hand Advanced Disposal Services, Inc. (NYSE:ADSW) is the least popular one with only 12 bullish hedge fund positions. WildHorse Resource Development Corporation (NYSE:WRD) is not the most popular stock in this group but hedge fund interest is still above average. This is a slightly positive signal but we’d rather spend our time researching stocks that hedge funds are piling on. In this regard PLT might be a better candidate to consider a long position.