UDR, Inc. (NYSE:UDR) was in 16 hedge funds’ portfolios at the end of the second quarter of 2019. UDR investors should pay attention to a decrease in hedge fund interest of late. There were 18 hedge funds in our database with UDR holdings at the end of the previous quarter. Our calculations also showed that UDR isn’t among the 30 most popular stocks among hedge funds (see the video below). 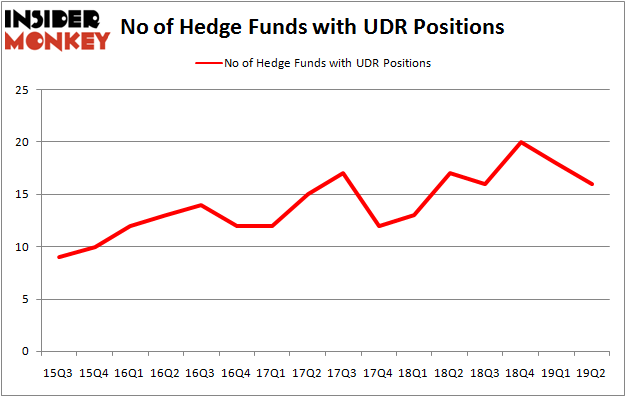 Unlike this former hedge fund manager who is convinced Dow will soar past 40000, our long-short investment strategy doesn’t rely on bull markets to deliver double digit returns. We only rely on hedge fund buy/sell signals. Let’s take a look at the latest hedge fund action surrounding UDR, Inc. (NYSE:UDR).

Heading into the third quarter of 2019, a total of 16 of the hedge funds tracked by Insider Monkey held long positions in this stock, a change of -11% from one quarter earlier. By comparison, 17 hedge funds held shares or bullish call options in UDR a year ago. With the smart money’s sentiment swirling, there exists a select group of noteworthy hedge fund managers who were increasing their stakes meaningfully (or already accumulated large positions).

When looking at the institutional investors followed by Insider Monkey, Renaissance Technologies, holds the most valuable position in UDR, Inc. (NYSE:UDR). Renaissance Technologies has a $411.9 million position in the stock, comprising 0.4% of its 13F portfolio. Coming in second is Zimmer Partners, led by Stuart J. Zimmer, holding a $99.1 million position; 1% of its 13F portfolio is allocated to the company. Other peers that hold long positions include Dmitry Balyasny’s Balyasny Asset Management, Israel Englander’s Millennium Management and Ken Griffin’s Citadel Investment Group.

Since UDR, Inc. (NYSE:UDR) has witnessed bearish sentiment from the entirety of the hedge funds we track, it’s safe to say that there is a sect of funds that elected to cut their entire stakes heading into Q3. At the top of the heap, Benjamin A. Smith’s Laurion Capital Management said goodbye to the largest investment of the “upper crust” of funds monitored by Insider Monkey, valued at about $1.8 million in stock, and Michael Gelband’s ExodusPoint Capital was right behind this move, as the fund sold off about $1.2 million worth. These bearish behaviors are interesting, as aggregate hedge fund interest dropped by 2 funds heading into Q3.

As you can see these stocks had an average of 23.75 hedge funds with bullish positions and the average amount invested in these stocks was $556 million. That figure was $646 million in UDR’s case. Expeditors International of Washington, Inc. (NASDAQ:EXPD) is the most popular stock in this table. On the other hand Steris Plc (NYSE:STE) is the least popular one with only 22 bullish hedge fund positions. Compared to these stocks UDR, Inc. (NYSE:UDR) is even less popular than STE. Hedge funds clearly dropped the ball on UDR as the stock delivered strong returns, though hedge funds’ consensus picks still generated respectable returns. Our calculations showed that top 20 most popular stocks among hedge funds returned 24.4% in 2019 through September 30th and outperformed the S&P 500 ETF (SPY) by 4 percentage points. A small number of hedge funds were also right about betting on UDR as the stock returned 8.8% during the third quarter and outperformed the market by an even larger margin.