Our extensive research has shown that imitating the smart money can generate significant returns for retail investors, which is why we track nearly 750 active prominent money managers and analyze their quarterly 13F filings. The stocks that are heavily bought by hedge funds historically outperformed the market, though there is no shortage of high profile failures like hedge funds’ 2018 losses in Facebook and Apple. Let’s take a closer look at what the funds we track think about U.S. Xpress Enterprises, Inc. (NYSE:USX) in this article.

U.S. Xpress Enterprises, Inc. (NYSE:USX) investors should be aware of a decrease in hedge fund sentiment of late. Our calculations also showed that USX isn’t among the 30 most popular stocks among hedge funds (see the video below).

In addition to following the biggest hedge funds for investment ideas, we also share stock pitches from conferences, investor letters and other sources  like this one where the fund manager is talking about two under the radar 1000% return potential stocks: first one in internet infrastructure and the second in the heart of advertising market. We use hedge fund buy/sell signals to determine whether to conduct in-depth analysis of these stock ideas which take days. Now we’re going to take a look at the key hedge fund action regarding U.S. Xpress Enterprises, Inc. (NYSE:USX).

Heading into the third quarter of 2019, a total of 8 of the hedge funds tracked by Insider Monkey held long positions in this stock, a change of -33% from the first quarter of 2019. Below, you can check out the change in hedge fund sentiment towards USX over the last 16 quarters. With hedgies’ capital changing hands, there exists an “upper tier” of notable hedge fund managers who were increasing their stakes substantially (or already accumulated large positions). 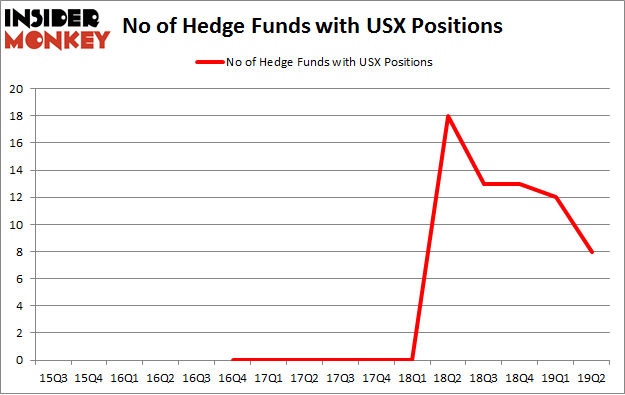 More specifically, Zimmer Partners was the largest shareholder of U.S. Xpress Enterprises, Inc. (NYSE:USX), with a stake worth $14.9 million reported as of the end of March. Trailing Zimmer Partners was Portolan Capital Management, which amassed a stake valued at $4.9 million. Tontine Asset Management, Citadel Investment Group, and BlueMar Capital Management were also very fond of the stock, giving the stock large weights in their portfolios.

Judging by the fact that U.S. Xpress Enterprises, Inc. (NYSE:USX) has experienced a decline in interest from the aggregate hedge fund industry, it’s safe to say that there lies a certain “tier” of hedgies who were dropping their full holdings in the second quarter. At the top of the heap, Steve Pei’s Gratia Capital dumped the largest investment of all the hedgies watched by Insider Monkey, comprising close to $0.6 million in stock, and Paul Marshall and Ian Wace’s Marshall Wace LLP was right behind this move, as the fund cut about $0.3 million worth. These bearish behaviors are important to note, as aggregate hedge fund interest dropped by 4 funds in the second quarter.

As you can see these stocks had an average of 13.5 hedge funds with bullish positions and the average amount invested in these stocks was $73 million. That figure was $26 million in USX’s case. Eiger BioPharmaceuticals, Inc. (NASDAQ:EIGR) is the most popular stock in this table. On the other hand Great Ajax Corp (NYSE:AJX) is the least popular one with only 8 bullish hedge fund positions. Compared to these stocks U.S. Xpress Enterprises, Inc. (NYSE:USX) is even less popular than AJX. Hedge funds dodged a bullet by taking a bearish stance towards USX. Our calculations showed that the top 20 most popular hedge fund stocks returned 24.4% in 2019 through September 30th and outperformed the S&P 500 ETF (SPY) by 4 percentage points. Unfortunately USX wasn’t nearly as popular as these 20 stocks (hedge fund sentiment was very bearish); USX investors were disappointed as the stock returned -6.2% during the third quarter and underperformed the market. If you are interested in investing in large cap stocks with huge upside potential, you should check out the top 20 most popular stocks among hedge funds as many of these stocks already outperformed the market so far in 2019.