Insider Monkey has processed numerous 13F filings of hedge funds and successful value investors to create an extensive database of hedge fund holdings. The 13F filings show the hedge funds’ and successful investors’ positions as of the end of the second quarter. You can find write-ups about an individual hedge fund’s trades on numerous financial news websites. However, in this article we will take a look at their collective moves and analyze what the smart money thinks of TFS Financial Corporation (NASDAQ:TFSL) based on that data.

TFS Financial Corporation (NASDAQ:TFSL) investors should be aware of a decrease in hedge fund sentiment lately. TFSL was in 5 hedge funds’ portfolios at the end of the second quarter of 2019. There were 7 hedge funds in our database with TFSL positions at the end of the previous quarter. Our calculations also showed that TFSL isn’t among the 30 most popular stocks among hedge funds.

If you’d ask most investors, hedge funds are seen as slow, old financial tools of yesteryear. While there are over 8000 funds with their doors open at the moment, We choose to focus on the masters of this group, around 750 funds. These investment experts manage most of all hedge funds’ total asset base, and by paying attention to their finest equity investments, Insider Monkey has unsheathed many investment strategies that have historically outstripped the market. Insider Monkey’s flagship hedge fund strategy surpassed the S&P 500 index by around 5 percentage points per year since its inception in May 2014. We were able to generate large returns even by identifying short candidates. Our portfolio of short stocks lost 25.7% since February 2017 (through September 30th) even though the market was up more than 33% during the same period. We just shared a list of 10 short targets in our latest quarterly update .

Unlike some fund managers who are betting on Dow reaching 40000 in a year, our long-short investment strategy doesn’t rely on bull markets to deliver double digit returns. We only rely on hedge fund buy/sell signals. Let’s check out the new hedge fund action surrounding TFS Financial Corporation (NASDAQ:TFSL).

What have hedge funds been doing with TFS Financial Corporation (NASDAQ:TFSL)?

Heading into the third quarter of 2019, a total of 5 of the hedge funds tracked by Insider Monkey were bullish on this stock, a change of -29% from the previous quarter. The graph below displays the number of hedge funds with bullish position in TFSL over the last 16 quarters. With hedgies’ sentiment swirling, there exists a select group of notable hedge fund managers who were upping their holdings significantly (or already accumulated large positions). 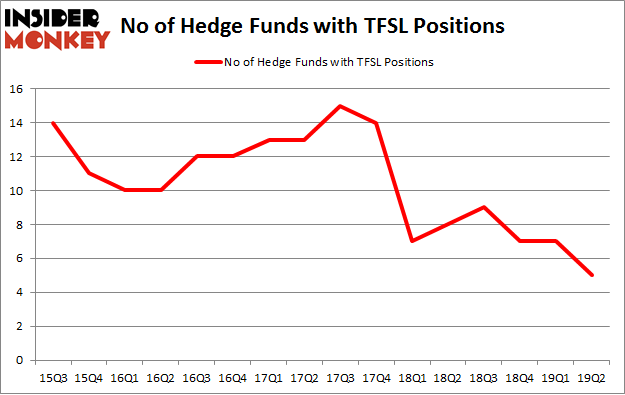 According to publicly available hedge fund and institutional investor holdings data compiled by Insider Monkey, Renaissance Technologies holds the biggest position in TFS Financial Corporation (NASDAQ:TFSL). Renaissance Technologies has a $118.6 million position in the stock, comprising 0.1% of its 13F portfolio. Coming in second is Empyrean Capital Partners, managed by Michael A. Price and Amos Meron, which holds a $32.3 million position; the fund has 1.4% of its 13F portfolio invested in the stock. Other professional money managers that are bullish consist of Cliff Asness’s AQR Capital Management, D. E. Shaw’s D E Shaw and Claes Fornell’s CSat Investment Advisory.

Since TFS Financial Corporation (NASDAQ:TFSL) has faced declining sentiment from the smart money, we can see that there was a specific group of hedge funds who were dropping their positions entirely by the end of the second quarter. At the top of the heap, Ken Griffin’s Citadel Investment Group cut the largest investment of the “upper crust” of funds watched by Insider Monkey, worth close to $2.4 million in stock, and David Harding’s Winton Capital Management was right behind this move, as the fund dropped about $0.5 million worth. These moves are important to note, as total hedge fund interest fell by 2 funds by the end of the second quarter.

As you can see these stocks had an average of 23.5 hedge funds with bullish positions and the average amount invested in these stocks was $519 million. That figure was $153 million in TFSL’s case. Nutanix, Inc. (NASDAQ:NTNX) is the most popular stock in this table. On the other hand Emcor Group Inc (NYSE:EME) is the least popular one with only 22 bullish hedge fund positions. Compared to these stocks TFS Financial Corporation (NASDAQ:TFSL) is even less popular than EME. Hedge funds dodged a bullet by taking a bearish stance towards TFSL. Our calculations showed that the top 20 most popular hedge fund stocks returned 24.4% in 2019 through September 30th and outperformed the S&P 500 ETF (SPY) by 4 percentage points. Unfortunately TFSL wasn’t nearly as popular as these 20 stocks (hedge fund sentiment was very bearish); TFSL investors were disappointed as the stock returned 1.3% during the third quarter and underperformed the market. If you are interested in investing in large cap stocks with huge upside potential, you should check out the top 20 most popular stocks (view the video below) among hedge funds as many of these stocks already outperformed the market so far in 2019.