Most investors tend to think that hedge funds and other asset managers are worthless, as they cannot beat even simple index fund portfolios. In fact, most people expect hedge funds to compete with and outperform the bull market that we have witnessed in recent years. However, hedge funds are generally partially hedged and aim at delivering attractive risk-adjusted returns rather than following the ups and downs of equity markets hoping that they will outperform the broader market. Our research shows that certain hedge funds do have great stock picking skills (and we can identify these hedge funds in advance pretty accurately), so let’s take a glance at the smart money sentiment towards Royal Bank of Canada (NYSE:RY).

Royal Bank of Canada (NYSE:RY) shareholders have witnessed a decrease in activity from the world’s largest hedge funds lately. Our calculations also showed that RY isn’t among the 30 most popular stocks among hedge funds (see the video at the end of this article).

Today there are several formulas market participants use to grade publicly traded companies. A pair of the less known formulas are hedge fund and insider trading activity. Our experts have shown that, historically, those who follow the top picks of the best investment managers can trounce the S&P 500 by a very impressive margin (see the details here).

Unlike some fund managers who are betting on Dow reaching 40000 in a year, our long-short investment strategy doesn’t rely on bull markets to deliver double digit returns. We only rely on hedge fund buy/sell signals. Let’s review the key hedge fund action regarding Royal Bank of Canada (NYSE:RY). 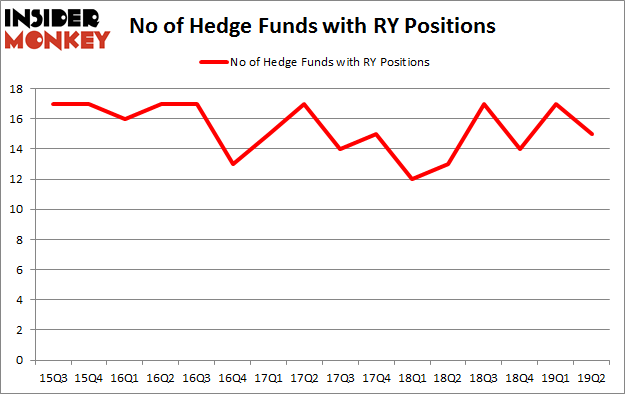 Among these funds, Renaissance Technologies held the most valuable stake in Royal Bank of Canada (NYSE:RY), which was worth $183.9 million at the end of the second quarter. On the second spot was Arrowstreet Capital which amassed $54.1 million worth of shares. Moreover, Two Sigma Advisors, Bridgewater Associates, and GLG Partners were also bullish on Royal Bank of Canada (NYSE:RY), allocating a large percentage of their portfolios to this stock.

Because Royal Bank of Canada (NYSE:RY) has experienced declining sentiment from the aggregate hedge fund industry, we can see that there was a specific group of hedge funds that decided to sell off their positions entirely by the end of the second quarter. Interestingly, Cliff Asness’s AQR Capital Management cut the biggest investment of the 750 funds watched by Insider Monkey, worth an estimated $78.4 million in stock. Benjamin A. Smith’s fund, Laurion Capital Management, also cut its stock, about $1.7 million worth. These moves are interesting, as aggregate hedge fund interest fell by 2 funds by the end of the second quarter.

Let’s go over hedge fund activity in other stocks – not necessarily in the same industry as Royal Bank of Canada (NYSE:RY) but similarly valued. We will take a look at United Technologies Corporation (NYSE:UTX), Amgen, Inc. (NASDAQ:AMGN), Eli Lilly and Company (NYSE:LLY), and Linde plc (NYSE:LIN). This group of stocks’ market valuations are similar to RY’s market valuation.

As you can see these stocks had an average of 47.75 hedge funds with bullish positions and the average amount invested in these stocks was $3227 million. That figure was $383 million in RY’s case. United Technologies Corporation (NYSE:UTX) is the most popular stock in this table. On the other hand Linde plc (NYSE:LIN) is the least popular one with only 41 bullish hedge fund positions. Compared to these stocks Royal Bank of Canada (NYSE:RY) is even less popular than LIN. Our calculations showed that top 20 most popular stocks among hedge funds returned 24.4% in 2019 through September 30th and outperformed the S&P 500 ETF (SPY) by 4 percentage points. A small number of hedge funds were also right about betting on RY, though not to the same extent, as the stock returned 3.2% during the third quarter and outperformed the market as well.