The elite funds run by legendary investors such as Dan Loeb and David Tepper make hundreds of millions of dollars for themselves and their investors by spending enormous resources doing research on small cap stocks that big investment banks don’t follow. Because of their pay structures, they have strong incentive to do the research necessary to beat the market. That’s why we pay close attention to what they think in small cap stocks. In this article, we take a closer look at Prosperity Bancshares, Inc. (NYSE:PB) from the perspective of those elite funds.

Prosperity Bancshares, Inc. (NYSE:PB) was in 6 hedge funds’ portfolios at the end of the third quarter of 2018. PB investors should pay attention to a decrease in enthusiasm from smart money lately. There were 10 hedge funds in our database with PB positions at the end of the previous quarter. Our calculations also showed that PB isn’t among the 30 most popular stocks among hedge funds.

How have hedgies been trading Prosperity Bancshares, Inc. (NYSE:PB)?

At the end of the third quarter, a total of 6 of the hedge funds tracked by Insider Monkey were bullish on this stock, a change of -40% from the previous quarter. The graph below displays the number of hedge funds with bullish position in PB over the last 13 quarters. With hedgies’ sentiment swirling, there exists a select group of key hedge fund managers who were boosting their stakes meaningfully (or already accumulated large positions). 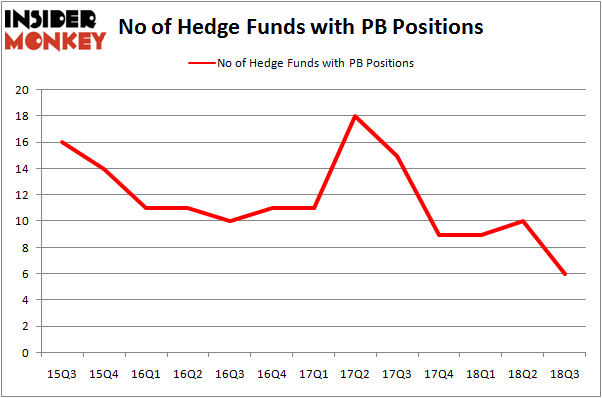 The largest stake in Prosperity Bancshares, Inc. (NYSE:PB) was held by Balyasny Asset Management, which reported holding $34.5 million worth of stock at the end of September. It was followed by Fisher Asset Management with a $25.9 million position. Other investors bullish on the company included Third Avenue Management, Millennium Management, and BlueCrest Capital Mgmt..

Due to the fact that Prosperity Bancshares, Inc. (NYSE:PB) has experienced declining sentiment from the smart money, logic holds that there was a specific group of money managers that slashed their full holdings last quarter. At the top of the heap, Noam Gottesman’s GLG Partners said goodbye to the largest investment of the “upper crust” of funds watched by Insider Monkey, comprising close to $3.7 million in stock. Benjamin A. Smith’s fund, Laurion Capital Management, also cut its stock, about $2.1 million worth. These bearish behaviors are intriguing to say the least, as total hedge fund interest was cut by 4 funds last quarter.

As you can see these stocks had an average of 26 hedge funds with bullish positions and the average amount invested in these stocks was $746 million. That figure was $74 million in PB’s case. InterXion Holding NV (NYSE:INXN) is the most popular stock in this table. On the other hand Axis Capital Holdings Limited (NYSE:AXS) is the least popular one with only 21 bullish hedge fund positions. Compared to these stocks Prosperity Bancshares, Inc. (NYSE:PB) is even less popular than AXS. Considering that hedge funds aren’t fond of this stock in relation to other companies analyzed in this article, it may be a good idea to analyze it in detail and understand why the smart money isn’t behind this stock. This isn’t necessarily bad news. Although it is possible that hedge funds may think the stock is overpriced and view the stock as a short candidate, they may not be very familiar with the bullish thesis. In either case more research is warranted.