We know that hedge funds generate strong, risk-adjusted returns over the long run, therefore imitating the picks that they are collectively bullish on can be a profitable strategy for retail investors. With billions of dollars in assets, smart money investors have to conduct complex analyses, spend many resources and use tools that are not always available for the general crowd. This doesn’t mean that they don’t have occasional colossal losses; they do (like Peltz’s recent General Electric losses). However, it is still a good idea to keep an eye on hedge fund activity. With this in mind, as the current round of 13F filings has just ended, let’s examine the smart money sentiment towards Mellanox Technologies, Ltd. (NASDAQ:MLNX).

Mellanox Technologies, Ltd. (NASDAQ:MLNX) was in 39 hedge funds’ portfolios at the end of June. MLNX has experienced a decrease in support from the world’s most elite money managers of late. There were 41 hedge funds in our database with MLNX holdings at the end of the previous quarter. Our calculations also showed that MLNX isn’t among the 30 most popular stocks among hedge funds (view the video below). 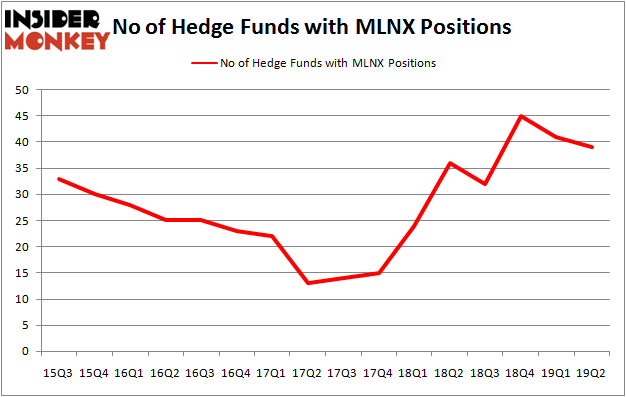 Unlike some fund managers who are betting on Dow reaching 40000 in a year, our long-short investment strategy doesn’t rely on bull markets to deliver double digit returns. We only rely on hedge fund buy/sell signals. We’re going to take a look at the recent hedge fund action regarding Mellanox Technologies, Ltd. (NASDAQ:MLNX).

Among these funds, Pentwater Capital Management held the most valuable stake in Mellanox Technologies, Ltd. (NASDAQ:MLNX), which was worth $219.8 million at the end of the second quarter. On the second spot was Magnetar Capital which amassed $187.8 million worth of shares. Moreover, Alpine Associates, Renaissance Technologies, and Everett Capital Advisors were also bullish on Mellanox Technologies, Ltd. (NASDAQ:MLNX), allocating a large percentage of their portfolios to this stock.

Since Mellanox Technologies, Ltd. (NASDAQ:MLNX) has experienced bearish sentiment from hedge fund managers, it’s safe to say that there lies a certain “tier” of money managers that slashed their entire stakes by the end of the second quarter. Intriguingly, Andrew Feldstein and Stephen Siderow’s Blue Mountain Capital said goodbye to the biggest investment of all the hedgies monitored by Insider Monkey, totaling close to $31.5 million in call options, and Glenn Russell Dubin’s Highbridge Capital Management was right behind this move, as the fund dropped about $11.8 million worth. These transactions are interesting, as total hedge fund interest was cut by 2 funds by the end of the second quarter.