The financial regulations require hedge funds and wealthy investors that crossed the $100 million equity holdings threshold to file a report that shows their positions at the end of every quarter. Even though it isn’t the intention, these filings to a certain extent level the playing field for ordinary investors. The latest round of 13F filings disclosed the funds’ positions on June 28th. We at Insider Monkey have made an extensive database of nearly 750 of those established hedge funds and famous value investors’ filings. In this article, we analyze how these elite funds and prominent investors traded McDonald’s Corporation (NYSE:MCD) based on those filings.

Is McDonald’s Corporation (NYSE:MCD) a buy right now? The best stock pickers are getting less bullish. The number of long hedge fund bets decreased by 2 in recent months. Our calculations also showed that MCD isn’t among the 30 most popular stocks among hedge funds (see the video at the end of this article).

To the average investor there are tons of gauges market participants employ to evaluate publicly traded companies. A pair of the most underrated gauges are hedge fund and insider trading indicators. Our researchers have shown that, historically, those who follow the top picks of the elite money managers can beat the broader indices by a healthy amount (see the details here).

Unlike some fund managers who are betting on Dow reaching 40000 in a year, our long-short investment strategy doesn’t rely on bull markets to deliver double digit returns. We only rely on hedge fund buy/sell signals. We’re going to review the key hedge fund action surrounding McDonald’s Corporation (NYSE:MCD).

Heading into the third quarter of 2019, a total of 52 of the hedge funds tracked by Insider Monkey held long positions in this stock, a change of -4% from the previous quarter. Below, you can check out the change in hedge fund sentiment towards MCD over the last 16 quarters. With hedgies’ sentiment swirling, there exists a select group of noteworthy hedge fund managers who were increasing their holdings considerably (or already accumulated large positions). 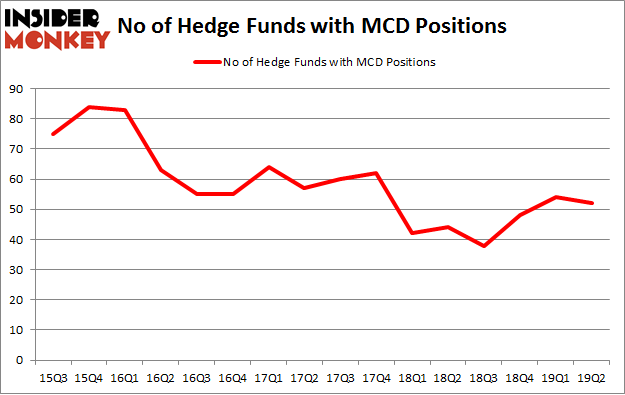 More specifically, Two Sigma Advisors was the largest shareholder of McDonald’s Corporation (NYSE:MCD), with a stake worth $422.4 million reported as of the end of March. Trailing Two Sigma Advisors was D E Shaw, which amassed a stake valued at $388.1 million. Citadel Investment Group, Melvin Capital Management, and Marshall Wace LLP were also very fond of the stock, giving the stock large weights in their portfolios.

Since McDonald’s Corporation (NYSE:MCD) has experienced bearish sentiment from the aggregate hedge fund industry, it’s safe to say that there were a few money managers who were dropping their positions entirely by the end of the second quarter. Interestingly, Jim Simons’s Renaissance Technologies dumped the largest investment of the 750 funds monitored by Insider Monkey, valued at an estimated $183.4 million in stock, and John Brennan’s Sirios Capital Management was right behind this move, as the fund dumped about $69.7 million worth. These moves are interesting, as aggregate hedge fund interest dropped by 2 funds by the end of the second quarter.

As you can see these stocks had an average of 42.75 hedge funds with bullish positions and the average amount invested in these stocks was $3148 million. That figure was $2906 million in MCD’s case. Adobe Inc. (NASDAQ:ADBE) is the most popular stock in this table. On the other hand TOTAL S.A. (NYSE:TOT) is the least popular one with only 13 bullish hedge fund positions. McDonald’s Corporation (NYSE:MCD) is not the most popular stock in this group but hedge fund interest is still above average. Our calculations showed that top 20 most popular stocks among hedge funds returned 24.4% in 2019 through September 30th and outperformed the S&P 500 ETF (SPY) by 4 percentage points. Hedge funds were also right about betting on MCD, though not to the same extent, as the stock returned 3.9% during the third quarter and outperformed the market as well.