Is Lindsay Corporation (NYSE:LNN) a good equity to bet on right now? We like to check what the smart money thinks first before doing extensive research on a given stock. Although there have been several high profile failed hedge fund picks, the consensus picks among hedge fund investors have historically outperformed the market after adjusting for known risk attributes. It’s not surprising given that hedge funds have access to better information and more resources to predict the winners in the stock market.

Lindsay Corporation (NYSE:LNN) was in 6 hedge funds’ portfolios at the end of the second quarter of 2019. LNN investors should pay attention to a decrease in enthusiasm from smart money of late. There were 7 hedge funds in our database with LNN holdings at the end of the previous quarter. Our calculations also showed that LNN isn’t among the 30 most popular stocks among hedge funds (see the video below).

What does smart money think about Lindsay Corporation (NYSE:LNN)? 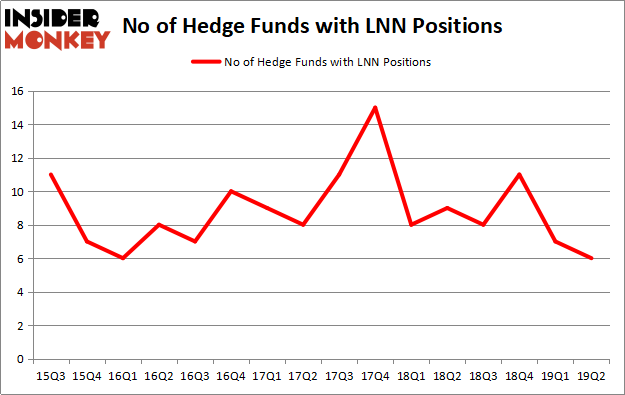 More specifically, Royce & Associates was the largest shareholder of Lindsay Corporation (NYSE:LNN), with a stake worth $72.7 million reported as of the end of March. Trailing Royce & Associates was Impax Asset Management, which amassed a stake valued at $72 million. Renaissance Technologies, GAMCO Investors, and D E Shaw were also very fond of the stock, giving the stock large weights in their portfolios.

We view hedge fund activity in the stock unfavorable, but in this case there was only a single hedge fund selling its entire position: Two Sigma Advisors. One hedge fund selling its entire position doesn’t always imply a bearish intent. Theoretically a hedge fund may decide to sell a promising position in order to invest the proceeds in a more promising idea. However, we don’t think this is the case in this case because only one of the 800+ hedge funds tracked by Insider Monkey identified as a viable investment and initiated a position in the stock (that fund was PEAK6 Capital Management).

Let’s go over hedge fund activity in other stocks – not necessarily in the same industry as Lindsay Corporation (NYSE:LNN) but similarly valued. We will take a look at Casa Therapeutics Inc (NASDAQ:CARA), Deciphera Pharmaceuticals, Inc. (NASDAQ:DCPH), ZIOPHARM Oncology Inc. (NASDAQ:ZIOP), and Tufin Software Technologies Ltd. (NYSE:TUFN). All of these stocks’ market caps are similar to LNN’s market cap.

As you can see these stocks had an average of 10.25 hedge funds with bullish positions and the average amount invested in these stocks was $112 million. That figure was $176 million in LNN’s case. Deciphera Pharmaceuticals, Inc. (NASDAQ:DCPH) is the most popular stock in this table. On the other hand Tufin Software Technologies Ltd. (NYSE:TUFN) is the least popular one with only 6 bullish hedge fund positions. Compared to these stocks Lindsay Corporation (NYSE:LNN) is even less popular than TUFN. Hedge funds clearly dropped the ball on LNN as the stock delivered strong returns, though hedge funds’ consensus picks still generated respectable returns. Our calculations showed that top 20 most popular stocks among hedge funds returned 24.4% in 2019 through September 30th and outperformed the S&P 500 ETF (SPY) by 4 percentage points. A small number of hedge funds were also right about betting on LNN as the stock returned 13.3% during the third quarter and outperformed the market by an even larger margin.