Insider Monkey finished processing more than 700 13F filings made by hedge funds and prominent investors. These filings show these funds’ portfolio positions as of September 30th. What do these smart investors think about Lindblad Expeditions Holdings Inc (NASDAQ:LIND)?

Is Lindblad Expeditions Holdings Inc (NASDAQ:LIND) the right pick for your portfolio? Hedge funds are turning less bullish. The number of bullish hedge fund positions went down by 2 during the third quarter. Our calculations also showed that LIND isn’t among the 30 most popular stocks among hedge funds, but this is expected for a micro-cap stock. On the plus side ValueAct Capital purchased around 600K shares in November and December at prices slightly above $12.50. ValueAct filed a 13D regarding LIND this week.

What have hedge funds been doing with Lindblad Expeditions Holdings Inc (NASDAQ:LIND)? 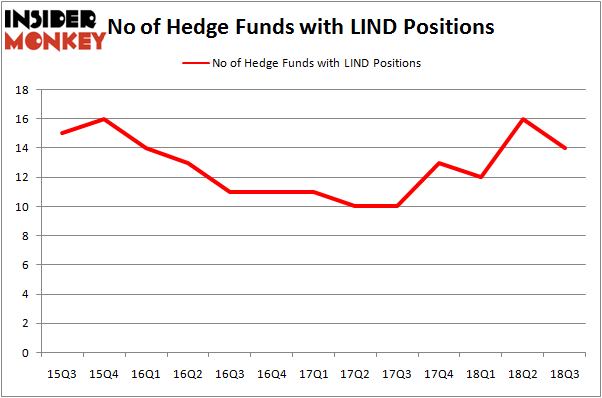 More specifically, ValueAct Capital was the largest shareholder of Lindblad Expeditions Holdings Inc (NASDAQ:LIND), with a stake worth $25.2 million reported as of the end of September. Trailing ValueAct Capital was Rutabaga Capital Management, which amassed a stake valued at $16.4 million. Royce & Associates, Renaissance Technologies, and Headlands Capital were also very fond of the stock, giving the stock large weights in their portfolios.

Judging by the fact that Lindblad Expeditions Holdings Inc (NASDAQ:LIND) has experienced falling interest from hedge fund managers, we can see that there is a sect of fund managers who were dropping their entire stakes in the third quarter. Interestingly, Ken Griffin’s Citadel Investment Group dropped the largest investment of the “upper crust” of funds followed by Insider Monkey, valued at close to $1.3 million in stock. Joel Ramin’s fund, 12 West Capital Management, also dropped its stock, about $0.8 million worth. These moves are interesting, as aggregate hedge fund interest dropped by 2 funds in the third quarter.

As you can see these stocks had an average of 12.5 hedge funds with bullish positions and the average amount invested in these stocks was $82 million. That figure was $92 million in LIND’s case. Veritex Holdings Inc (NASDAQ:VBTX) is the most popular stock in this table. On the other hand Templeton Dragon Fund, Inc. (NYSE:TDF) is the least popular one with only 1 bullish hedge fund positions. Lindblad Expeditions Holdings Inc (NASDAQ:LIND) is not the most popular stock in this group but hedge fund interest is still above average.

Overall, Jeff Ubben’s fund is bullish on the stock and willing to add to its position around $12.50. Since LIND shares currently change hands at $13.25, we aren’t too enthusiastic about recommending new positions. We don’t think the stock price reflects the probability of an economic slowdown or recession whereas there are plenty of other stocks that are growing at similar rates, yet trade at lower multiples. So, we will keep an eye on LIND but won’t recommend a position for the time being.