Out of thousands of stocks that are currently traded on the market, it is difficult to determine those that can really generate strong returns. Hedge funds and institutional investors spend millions of dollars on analysts with MBAs and PhDs, who are industry experts and well connected to other industry and media insiders on top of that. Individual investors can piggyback the hedge funds employing these talents and can benefit from their vast resources and knowledge in that way. We analyze quarterly 13F filings of over 700 hedge funds and, by looking at the smart money sentiment that surrounds a stock, we can determine whether it has potential to beat the market over the long-term. Therefore, let’s take a closer look at what smart money thinks about Evergy, Inc. (NYSE:EVRG).

Is Evergy, Inc. (NYSE:EVRG) a buy right now? Prominent investors are getting less bullish. The number of bullish hedge fund positions fell by 2 in recent months. Our calculations also showed that EVRG isn’t among the 30 most popular stocks among hedge funds. EVRG was in 23 hedge funds’ portfolios at the end of September. There were 25 hedge funds in our database with EVRG positions at the end of the previous quarter.

What does the smart money think about Evergy, Inc. (NYSE:EVRG)?

At Q3’s end, a total of 23 of the hedge funds tracked by Insider Monkey held long positions in this stock, a change of -8% from the previous quarter. Below, you can check out the change in hedge fund sentiment towards EVRG over the last 13 quarters. So, let’s find out which hedge funds were among the top holders of the stock and which hedge funds were making big moves. 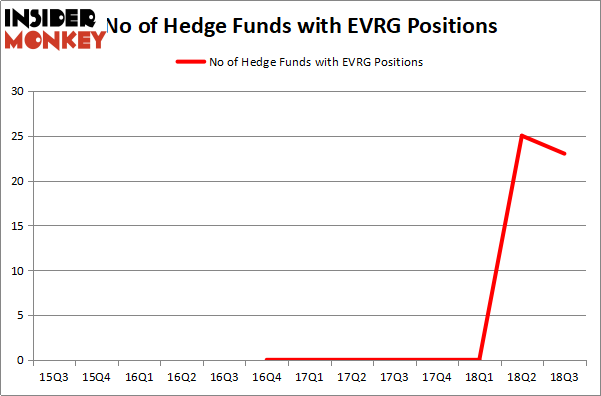 The largest stake in Evergy, Inc. (NYSE:EVRG) was held by Renaissance Technologies, which reported holding $316.8 million worth of stock at the end of September. It was followed by Zimmer Partners with a $300.4 million position. Other investors bullish on the company included Millennium Management, Citadel Investment Group, and D E Shaw.

Due to the fact that Evergy, Inc. (NYSE:EVRG) has faced bearish sentiment from the smart money, it’s safe to say that there lies a certain “tier” of funds who sold off their full holdings in the third quarter. It’s worth mentioning that Zach Schreiber’s Point State Capital dumped the largest stake of the 700 funds monitored by Insider Monkey, worth close to $21.6 million in stock, and Peter J. Hark’s Shelter Harbor Advisors was right behind this move, as the fund cut about $9.8 million worth. These transactions are important to note, as aggregate hedge fund interest fell by 2 funds in the third quarter.

As you can see these stocks had an average of 32.75 hedge funds with bullish positions and the average amount invested in these stocks was $1.53 billion. That figure was $1.59 billion in EVRG’s case. Restaurant Brands International Inc (NYSE:QSR) is the most popular stock in this table. On the other hand Avangrid, Inc. (NYSE:AGR) is the least popular one with only 18 bullish hedge fund positions. Evergy, Inc. (NYSE:EVRG) is not the least popular stock in this group but hedge fund interest is still below average. This is a slightly negative signal and we’d rather spend our time researching stocks that hedge funds are piling on. In this regard QSR might be a better candidate to consider a long position.