Is Entravision Communication Corporation (NYSE:EVC) a good equity to bet on right now? We like to check what the smart money thinks first before doing extensive research. Although there have been several high profile failed hedge fund picks, the consensus picks among hedge fund investors have historically outperformed the market after adjusting for known risk attributes. It’s not surprising given that hedge funds have access to better information and more resources to find the latest market-moving information.

Entravision Communication Corporation (NYSE:EVC) has seen a decrease in activity from the world’s largest hedge funds of late. EVC was in 15 hedge funds’ portfolios at the end of the third quarter of 2018. There were 16 hedge funds in our database with EVC holdings at the end of the previous quarter. Our calculations also showed that evc isn’t among the 30 most popular stocks among hedge funds. 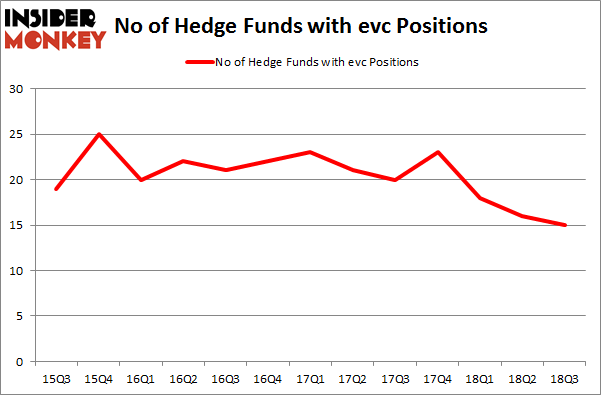 The largest stake in Entravision Communication Corporation (NYSE:EVC) was held by AQR Capital Management, which reported holding $13.4 million worth of stock at the end of September. It was followed by Renaissance Technologies with a $6 million position. Other investors bullish on the company included D E Shaw, Two Sigma Advisors, and Royce & Associates.

Because Entravision Communication Corporation (NYSE:EVC) has experienced bearish sentiment from the smart money, we can see that there lies a certain “tier” of fund managers who sold off their entire stakes heading into Q3. Interestingly, Andrew Feldstein and Stephen Siderow’s Blue Mountain Capital said goodbye to the biggest stake of the 700 funds tracked by Insider Monkey, comprising an estimated $1.9 million in stock, and Dmitry Balyasny’s Balyasny Asset Management was right behind this move, as the fund said goodbye to about $0.2 million worth. These bearish behaviors are interesting, as total hedge fund interest dropped by 1 funds heading into Q3.

As you can see these stocks had an average of 8.5 hedge funds with bullish positions and the average amount invested in these stocks was $60 million. That figure was $31 million in EVC’s case. NN, Inc. (NASDAQ:NNBR) is the most popular stock in this table. On the other hand Envirostar Inc (NYSE:EVI) is the least popular one with only 2 bullish hedge fund positions. Compared to these stocks Entravision Communication Corporation (NYSE:EVC) is more popular among hedge funds. Considering that hedge funds are fond of this stock in relation to its market cap peers, it may be a good idea to analyze it in detail and potentially include it in your portfolio.