Our extensive research has shown that imitating the smart money can generate significant returns for retail investors, which is why we track nearly 750 active prominent money managers and analyze their quarterly 13F filings. The stocks that are heavily bought by hedge funds historically outperformed the market, though there is no shortage of high profile failures like hedge funds’ 2018 losses in Facebook and Apple. Let’s take a closer look at what the funds we track think about Enterprise Products Partners L.P. (NYSE:EPD) in this article.

Is Enterprise Products Partners L.P. (NYSE:EPD) a bargain? Hedge funds are getting less optimistic. The number of long hedge fund positions were trimmed by 1 in recent months. Our calculations also showed that EPD isn’t among the 30 most popular stocks among hedge funds (see the video below). EPD was in 19 hedge funds’ portfolios at the end of the second quarter of 2019. There were 20 hedge funds in our database with EPD holdings at the end of the previous quarter. 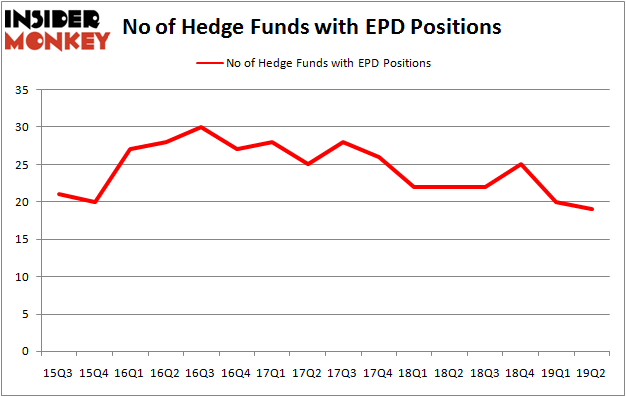 Unlike some fund managers who are betting on Dow reaching 40000 in a year, our long-short investment strategy doesn’t rely on bull markets to deliver double digit returns. We only rely on hedge fund buy/sell signals. Let’s take a glance at the key hedge fund action encompassing Enterprise Products Partners L.P. (NYSE:EPD).

When looking at the institutional investors followed by Insider Monkey, Stuart J. Zimmer’s Zimmer Partners has the biggest position in Enterprise Products Partners L.P. (NYSE:EPD), worth close to $134.5 million, corresponding to 1.4% of its total 13F portfolio. The second most bullish fund manager is Renaissance Technologies, which holds a $57.8 million position; the fund has 0.1% of its 13F portfolio invested in the stock. Other peers that are bullish contain Perella Weinberg Partners, John Osterweis’s Osterweis Capital Management and Charles Davidson and Joseph Jacobs’s Wexford Capital.

Because Enterprise Products Partners L.P. (NYSE:EPD) has faced declining sentiment from the smart money, it’s safe to say that there were a few funds who were dropping their entire stakes by the end of the second quarter. Interestingly, Till Bechtolsheimer’s Arosa Capital Management said goodbye to the largest position of all the hedgies watched by Insider Monkey, worth about $23.3 million in stock. Peter Rathjens, Bruce Clarke and John Campbell’s fund, Arrowstreet Capital, also cut its stock, about $14.2 million worth. These moves are intriguing to say the least, as total hedge fund interest fell by 1 funds by the end of the second quarter.

Let’s check out hedge fund activity in other stocks – not necessarily in the same industry as Enterprise Products Partners L.P. (NYSE:EPD) but similarly valued. We will take a look at CSX Corporation (NASDAQ:CSX), The PNC Financial Services Group Inc. (NYSE:PNC), Colgate-Palmolive Company (NYSE:CL), and Dominion Energy, Inc. (NYSE:D). This group of stocks’ market valuations are similar to EPD’s market valuation.

As you can see these stocks had an average of 41.25 hedge funds with bullish positions and the average amount invested in these stocks was $2654 million. That figure was $365 million in EPD’s case. CSX Corporation (NASDAQ:CSX) is the most popular stock in this table. On the other hand The PNC Financial Services Group Inc. (NYSE:PNC) is the least popular one with only 38 bullish hedge fund positions. Compared to these stocks Enterprise Products Partners L.P. (NYSE:EPD) is even less popular than PNC. Hedge funds dodged a bullet by taking a bearish stance towards EPD. Our calculations showed that the top 20 most popular hedge fund stocks returned 24.4% in 2019 through September 30th and outperformed the S&P 500 ETF (SPY) by 4 percentage points. Unfortunately EPD wasn’t nearly as popular as these 20 stocks (hedge fund sentiment was very bearish); EPD investors were disappointed as the stock returned 0.5% during the third quarter and underperformed the market. If you are interested in investing in large cap stocks with huge upside potential, you should check out the top 20 most popular stocks among hedge funds as many of these stocks already outperformed the market so far in 2019.