After several tireless days we have finished crunching the numbers from the more than 700 13F filings issued by the elite hedge funds and other investment firms that we track at Insider Monkey, which disclosed those firms’ equity portfolios as of September 30. The results of that effort will be put on display in this article, as we share valuable insight into the smart money sentiment towards Camden Property Trust (NYSE:CPT).

Camden Property Trust (NYSE:CPT) has experienced a decrease in hedge fund interest recently. Our calculations also showed that cpt isn’t among the 30 most popular stocks among hedge funds.

At the moment there are tons of signals market participants put to use to appraise their holdings. A duo of the most useful signals are hedge fund and insider trading signals. We have shown that, historically, those who follow the best picks of the top investment managers can outpace the broader indices by a very impressive amount (see the details here). 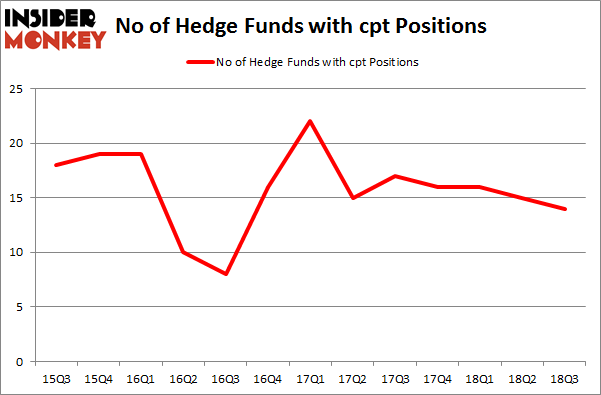 More specifically, Citadel Investment Group was the largest shareholder of Camden Property Trust (NYSE:CPT), with a stake worth $103.6 million reported as of the end of September. Trailing Citadel Investment Group was Millennium Management, which amassed a stake valued at $70.9 million. AEW Capital Management, Two Sigma Advisors, and AQR Capital Management were also very fond of the stock, giving the stock large weights in their portfolios.

Due to the fact that Camden Property Trust (NYSE:CPT) has experienced declining sentiment from hedge fund managers, logic holds that there lies a certain “tier” of hedgies that decided to sell off their positions entirely last quarter. Interestingly, Dmitry Balyasny’s Balyasny Asset Management cut the largest position of the 700 funds watched by Insider Monkey, worth an estimated $35.1 million in stock, and Paul Tudor Jones’s Tudor Investment Corp was right behind this move, as the fund said goodbye to about $1.1 million worth. These moves are interesting, as total hedge fund interest dropped by 1 funds last quarter.

As you can see these stocks had an average of 22.5 hedge funds with bullish positions and the average amount invested in these stocks was $443 million. That figure was $281 million in CPT’s case. RPM International Inc. (NYSE:RPM) is the most popular stock in this table. On the other hand Grupo Aval Acciones y Valores S.A. (NYSE:AVAL) is the least popular one with only 6 bullish hedge fund positions. Camden Property Trust (NYSE:CPT) is not the least popular stock in this group but hedge fund interest is still below average. This is a slightly negative signal and we’d rather spend our time researching stocks that hedge funds are piling on. In this regard RPM might be a better candidate to consider a long position.