Booz Allen Hamilton Holding Corporation (NYSE:BAH) was in 5 hedge funds’ portfolio at the end of March. BAH shareholders have witnessed a decrease in enthusiasm from smart money in recent months. There were 6 hedge funds in our database with BAH positions at the end of the previous quarter.

In the financial world, there are a multitude of methods market participants can use to monitor the equity markets. A pair of the best are hedge fund and insider trading movement. At Insider Monkey, our studies have shown that, historically, those who follow the top picks of the best fund managers can outclass the S&P 500 by a very impressive amount (see just how much).

Equally as important, optimistic insider trading activity is another way to parse down the marketplace. As the old adage goes: there are many motivations for an upper level exec to drop shares of his or her company, but only one, very clear reason why they would buy. Plenty of empirical studies have demonstrated the valuable potential of this method if you understand what to do (learn more here).

Heading into Q2, a total of 5 of the hedge funds we track were bullish in this stock, a change of -17% from the first quarter. With hedge funds’ positions undergoing their usual ebb and flow, there exists an “upper tier” of notable hedge fund managers who were boosting their holdings significantly. 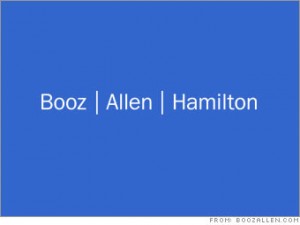 When looking at the hedgies we track, Joel Greenblatt’s Gotham Asset Management had the largest position in Booz Allen Hamilton Holding Corporation (NYSE:BAH), worth close to $12.4 million, accounting for 0.6% of its total 13F portfolio. The second largest stake is held by Israel Englander of Millennium Management, with a $2 million position; the fund has less than 0.1%% of its 13F portfolio invested in the stock. Remaining peers with similar optimism include Paul Tudor Jones’s Tudor Investment Corp, Jim Simons’s Renaissance Technologies and Thomas Bailard’s Bailard Inc.

Seeing as Booz Allen Hamilton Holding Corporation (NYSE:BAH) has faced a declination in interest from the entirety of the hedge funds we track, logic holds that there is a sect of fund managers who sold off their entire stakes heading into Q2. Intriguingly, Neil Chriss’s Hutchin Hill Capital said goodbye to the biggest investment of all the hedgies we key on, totaling about $1.1 million in stock.. Steven Cohen’s fund, SAC Capital Advisors, also cut its stock, about $0.4 million worth. These transactions are intriguing to say the least, as aggregate hedge fund interest dropped by 1 funds heading into Q2.

Insider trading activity, especially when it’s bullish, is most useful when the primary stock in question has seen transactions within the past six months. Over the last half-year time frame, Booz Allen Hamilton Holding Corporation (NYSE:BAH) has seen zero unique insiders buying, and 7 insider sales (see the details of insider trades here).