In these volatile markets we scrutinize hedge fund filings to get a reading on which direction each stock might be going. Before we spend countless hours researching a company, we like to analyze what insiders, hedge funds and billionaire investors think of the stock first. This is a necessary first step in our investment process because our research has shown that the elite investors’ consensus returns have been exceptional. In the following paragraphs, we find out what the billionaire investors and hedge funds think of BioTelemetry, Inc. (NASDAQ:BEAT).

BioTelemetry, Inc. (NASDAQ:BEAT) was in 15 hedge funds’ portfolios at the end of the fourth quarter of 2019. BEAT has seen a decrease in enthusiasm from smart money lately. There were 18 hedge funds in our database with BEAT positions at the end of the previous quarter. Our calculations also showed that BEAT isn’t among the 30 most popular stocks among hedge funds (click for Q4 rankings and see the video at the end of this article for Q3 rankings).

We leave no stone unturned when looking for the next great investment idea. For example, Federal Reserve and other Central Banks are tripping over each other to print more money. As a result, we believe gold stocks will outperform fixed income ETFs in the long-term. So we are checking out investment opportunities like this one. We read hedge fund investor letters and listen to stock pitches at hedge fund conferences. Our best call in 2020 was shorting the market when S&P 500 was trading at 3150 after realizing the coronavirus pandemic’s significance before most investors. Now let’s view the new hedge fund action regarding BioTelemetry, Inc. (NASDAQ:BEAT).

How have hedgies been trading BioTelemetry, Inc. (NASDAQ:BEAT)?

At Q4’s end, a total of 15 of the hedge funds tracked by Insider Monkey held long positions in this stock, a change of -17% from the third quarter of 2019. Below, you can check out the change in hedge fund sentiment towards BEAT over the last 18 quarters. So, let’s see which hedge funds were among the top holders of the stock and which hedge funds were making big moves. 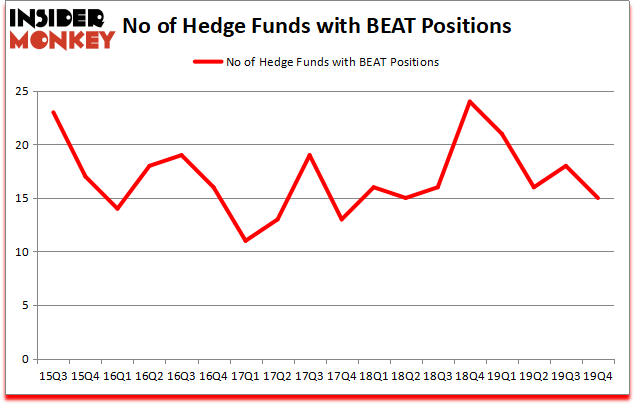 Of the funds tracked by Insider Monkey, Royce & Associates, managed by Chuck Royce, holds the largest position in BioTelemetry, Inc. (NASDAQ:BEAT). Royce & Associates has a $14.7 million position in the stock, comprising 0.1% of its 13F portfolio. On Royce & Associates’s heels is Sio Capital, led by Michael Castor, holding a $7.4 million position; 1.8% of its 13F portfolio is allocated to the company. Some other members of the smart money with similar optimism encompass Mitchell Blutt’s Consonance Capital Management, Frederick DiSanto’s Ancora Advisors and Noam Gottesman’s GLG Partners. In terms of the portfolio weights assigned to each position Lyon Street Capital allocated the biggest weight to BioTelemetry, Inc. (NASDAQ:BEAT), around 2.44% of its 13F portfolio. Sio Capital is also relatively very bullish on the stock, designating 1.76 percent of its 13F equity portfolio to BEAT.

Since BioTelemetry, Inc. (NASDAQ:BEAT) has faced bearish sentiment from hedge fund managers, logic holds that there exists a select few hedgies who sold off their positions entirely last quarter. At the top of the heap, Matthew Hulsizer’s PEAK6 Capital Management said goodbye to the biggest investment of the “upper crust” of funds watched by Insider Monkey, valued at about $1.1 million in stock. Cliff Asness’s fund, AQR Capital Management, also dropped its stock, about $1 million worth. These transactions are interesting, as total hedge fund interest dropped by 3 funds last quarter.

As you can see these stocks had an average of 13 hedge funds with bullish positions and the average amount invested in these stocks was $189 million. That figure was $50 million in BEAT’s case. STAAR Surgical Company (NASDAQ:STAA) is the most popular stock in this table. On the other hand Comstock Resources Inc (NYSE:CRK) is the least popular one with only 7 bullish hedge fund positions. BioTelemetry, Inc. (NASDAQ:BEAT) is not the most popular stock in this group but hedge fund interest is still above average. Our calculations showed that top 20 most popular stocks among hedge funds returned 41.3% in 2019 and outperformed the S&P 500 ETF (SPY) by 10.1 percentage points. These stocks lost 13.0% in 2020 through April 6th but still beat the market by 4.2 percentage points. Hedge funds were also right about betting on BEAT, though not to the same extent, as the stock returned -14.2% during the first three months of 2020 (through April 6th) and outperformed the market as well.