In this article you are going to find out whether hedge funds think Banco Bradesco SA (NYSE:BBD) is a good investment right now. We like to check what the smart money thinks first before doing extensive research on a given stock. Although there have been several high profile failed hedge fund picks, the consensus picks among hedge fund investors have historically outperformed the market after adjusting for known risk attributes. It’s not surprising given that hedge funds have access to better information and more resources to predict the winners in the stock market.

Banco Bradesco SA (NYSE:BBD) shareholders have witnessed a decrease in hedge fund sentiment of late. BBD was in 15 hedge funds’ portfolios at the end of March. There were 18 hedge funds in our database with BBD positions at the end of the previous quarter. Our calculations also showed that BBD isn’t among the 30 most popular stocks among hedge funds (click for Q1 rankings and see the video for a quick look at the top 5 stocks).

In the 21st century investor’s toolkit there are a multitude of indicators shareholders put to use to analyze publicly traded companies. Two of the most underrated indicators are hedge fund and insider trading indicators. Our researchers have shown that, historically, those who follow the top picks of the elite hedge fund managers can outperform the S&P 500 by a very impressive margin (see the details here).

At Insider Monkey we scour multiple sources to uncover the next great investment idea. For example, We take a look at lists like the 10 stocks that went up during the 2008 crash to identify the companies that are likely to deliver double digit returns in up and down markets. We interview hedge fund managers and ask them about their best ideas. We read hedge fund investor letters and listen to stock pitches at hedge fund conferences. For example we are checking out stocks recommended/scorned by legendary Bill Miller. Our best call in 2020 was shorting the market when the S&P 500 was trading at 3150 in February after realizing the coronavirus pandemic’s significance before most investors. Now we’re going to take a look at the new hedge fund action encompassing Banco Bradesco SA (NYSE:BBD). 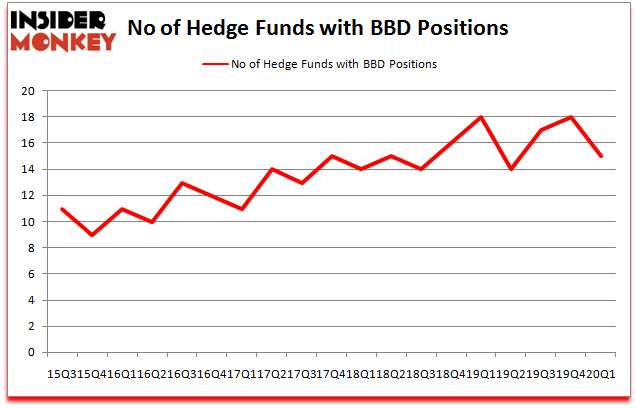 Among these funds, Fisher Asset Management held the most valuable stake in Banco Bradesco SA (NYSE:BBD), which was worth $172 million at the end of the third quarter. On the second spot was Oaktree Capital Management which amassed $24.9 million worth of shares. D E Shaw, Millennium Management, and Marshall Wace LLP were also very fond of the stock, becoming one of the largest hedge fund holders of the company. In terms of the portfolio weights assigned to each position RIT Capital Partners allocated the biggest weight to Banco Bradesco SA (NYSE:BBD), around 1% of its 13F portfolio. Oaktree Capital Management is also relatively very bullish on the stock, dishing out 0.7 percent of its 13F equity portfolio to BBD.

Since Banco Bradesco SA (NYSE:BBD) has witnessed falling interest from the smart money, logic holds that there were a few money managers that elected to cut their entire stakes heading into Q4. Interestingly, Rajiv Jain’s GQG Partners sold off the biggest position of the “upper crust” of funds tracked by Insider Monkey, comprising close to $86.4 million in stock, and Peter Rathjens, Bruce Clarke and John Campbell’s Arrowstreet Capital was right behind this move, as the fund cut about $42 million worth. These bearish behaviors are important to note, as total hedge fund interest was cut by 3 funds heading into Q4.

As you can see these stocks had an average of 28.75 hedge funds with bullish positions and the average amount invested in these stocks was $784 million. That figure was $246 million in BBD’s case. Barrick Gold Corporation (NYSE:GOLD) is the most popular stock in this table. On the other hand Prudential Public Limited Company (NYSE:PUK) is the least popular one with only 6 bullish hedge fund positions. Banco Bradesco SA (NYSE:BBD) is not the least popular stock in this group but hedge fund interest is still below average. This is a slightly negative signal and we’d rather spend our time researching stocks that hedge funds are piling on. Our calculations showed that top 10 most popular stocks among hedge funds returned 41.4% in 2019 and outperformed the S&P 500 ETF (SPY) by 10.1 percentage points. These stocks gained 13.3% in 2020 through June 25th and surpassed the market by 16.8 percentage points. Unfortunately BBD wasn’t nearly as popular as these 10 stocks (hedge fund sentiment was quite bearish); BBD investors were disappointed as the stock returned -1.7% during the second quarter and underperformed the market. If you are interested in investing in large cap stocks with huge upside potential, you should check out the top 10 most popular stocks among hedge funds as most of these stocks already outperformed the market in 2020.