It seems that the masses and most of the financial media hate hedge funds and what they do, but why is this hatred of hedge funds so prominent? At the end of the day, these asset management firms do not gamble the hard-earned money of the people who are on the edge of poverty. Truth be told, most hedge fund managers and other smaller players within this industry are very smart and skilled investors. Of course, they may also make wrong bets in some instances, but no one knows what the future holds and how market participants will react to the bountiful news that floods in each day. The Standard and Poor’s 500 Index returned approximately 20% in the first 9 months of this year (through September 30th). Conversely, hedge funds’ top 20 large-cap stock picks generated a return of 24% during the same 9-month period, with the majority of these stock picks outperforming the broader market benchmark. Coincidence? It might happen to be so, but it is unlikely. Our research covering the last 18 years indicates that hedge funds’ consensus stock picks generate superior risk-adjusted returns. That’s why we believe it isn’t a waste of time to check out hedge fund sentiment before you invest in a stock like Aphria Inc. (NYSE:APHA).

Is Aphria Inc. (NYSE:APHA) worth your attention right now? The best stock pickers are taking a bearish view. The number of long hedge fund positions were cut by 4 in recent months. Our calculations also showed that APHA isn’t among the 30 most popular stocks among hedge funds (see the video below). APHA was in 5 hedge funds’ portfolios at the end of the second quarter of 2019. There were 9 hedge funds in our database with APHA holdings at the end of the previous quarter.

To most shareholders, hedge funds are perceived as worthless, old financial vehicles of the past. While there are greater than 8000 funds trading at present, We choose to focus on the leaders of this group, approximately 750 funds. It is estimated that this group of investors command the lion’s share of all hedge funds’ total asset base, and by keeping an eye on their highest performing equity investments, Insider Monkey has deciphered several investment strategies that have historically defeated the market. Insider Monkey’s flagship hedge fund strategy outpaced the S&P 500 index by around 5 percentage points annually since its inception in May 2014. We were able to generate large returns even by identifying short candidates. Our portfolio of short stocks lost 25.7% since February 2017 (through September 30th) even though the market was up more than 33% during the same period. We just shared a list of 10 short targets in our latest quarterly update .

Unlike former hedge manager, Dr. Steve Sjuggerud, who is convinced Dow will soar past 40000, our long-short investment strategy doesn’t rely on bull markets to deliver double digit returns. We only rely on hedge fund buy/sell signals. Let’s take a glance at the new hedge fund action regarding Aphria Inc. (NYSE:APHA).

What does smart money think about Aphria Inc. (NYSE:APHA)?

Heading into the third quarter of 2019, a total of 5 of the hedge funds tracked by Insider Monkey held long positions in this stock, a change of -44% from one quarter earlier. Below, you can check out the change in hedge fund sentiment towards APHA over the last 16 quarters. So, let’s review which hedge funds were among the top holders of the stock and which hedge funds were making big moves. 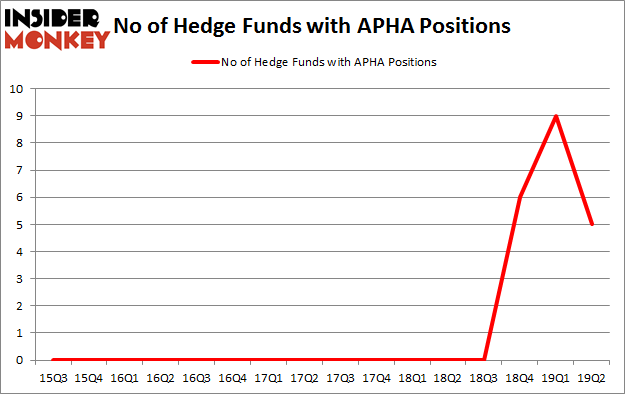 Of the funds tracked by Insider Monkey, Citadel Investment Group, managed by Ken Griffin, holds the biggest position in Aphria Inc. (NYSE:APHA). Citadel Investment Group has a $1.9 million call position in the stock, comprising less than 0.1%% of its 13F portfolio. The second largest stake is held by Renaissance Technologies holding a $1.7 million position; less than 0.1%% of its 13F portfolio is allocated to the stock. Remaining members of the smart money that hold long positions contain Edmond M. Safra’s EMS Capital, Ari Zweiman’s 683 Capital Partners and Noam Gottesman’s GLG Partners.

Judging by the fact that Aphria Inc. (NYSE:APHA) has witnessed bearish sentiment from hedge fund managers, logic holds that there was a specific group of funds who were dropping their full holdings last quarter. It’s worth mentioning that Ken Griffin’s Citadel Investment Group sold off the biggest investment of the “upper crust” of funds followed by Insider Monkey, comprising an estimated $2.4 million in stock, and William Harnisch’s Peconic Partners LLC was right behind this move, as the fund dumped about $2 million worth. These moves are important to note, as aggregate hedge fund interest fell by 4 funds last quarter.

As you can see these stocks had an average of 14.25 hedge funds with bullish positions and the average amount invested in these stocks was $133 million. That figure was $5 million in APHA’s case. McDermott International, Inc. (NYSE:MDR) is the most popular stock in this table. On the other hand MaxLinear, Inc. (NYSE:MXL) is the least popular one with only 7 bullish hedge fund positions. Compared to these stocks Aphria Inc. (NYSE:APHA) is even less popular than MXL. Hedge funds dodged a bullet by taking a bearish stance towards APHA. Our calculations showed that the top 20 most popular hedge fund stocks returned 24.4% in 2019 through September 30th and outperformed the S&P 500 ETF (SPY) by 4 percentage points. Unfortunately APHA wasn’t nearly as popular as these 20 stocks (hedge fund sentiment was very bearish); APHA investors were disappointed as the stock returned -26% during the third quarter and underperformed the market. If you are interested in investing in large cap stocks with huge upside potential, you should check out the top 20 most popular stocks among hedge funds as many of these stocks already outperformed the market so far in 2019.

Is Umpqua Holdings Corporation (UMPQ) A Good Stock To Buy?
Monthly Newsletter Strategy
Download a free copy of our newsletter and see the details inside!
Hedge Fund Resource Center
Related News
25 Biggest Marijuana Companies in the World 11 Largest Auto Insurance Companies In The US In 2019 10 Poorest Cities in America in 2019 8 Lowest Tar and Nicotine Cigarette Brands in 2019
Billionaire Hedge Funds