The Insider Monkey team has completed processing the quarterly 13F filings for the June quarter submitted by the hedge funds and other money managers included in our extensive database. Most hedge fund investors experienced strong gains on the back of a strong market performance, which certainly propelled them to adjust their equity holdings so as to maintain the desired risk profile. As a result, the relevancy of these public filings and their content is indisputable, as they may reveal numerous high-potential stocks. The following article will discuss the smart money sentiment towards American Airlines Group Inc (NASDAQ:AAL).

American Airlines Group Inc (NASDAQ:AAL) investors should be aware of a decrease in support from the world’s most elite money managers recently. Our calculations also showed that AAL isn’t among the 30 most popular stocks among hedge funds.

If you’d ask most market participants, hedge funds are perceived as underperforming, outdated financial vehicles of years past. While there are more than 8000 funds trading at the moment, Our researchers look at the bigwigs of this club, around 750 funds. These money managers have their hands on the lion’s share of the hedge fund industry’s total asset base, and by keeping track of their first-class investments, Insider Monkey has uncovered numerous investment strategies that have historically outstripped the S&P 500 index. Insider Monkey’s flagship hedge fund strategy surpassed the S&P 500 index by around 5 percentage points annually since its inception in May 2014. We were able to generate large returns even by identifying short candidates. Our portfolio of short stocks lost 25.7% since February 2017 (through September 30th) even though the market was up more than 33% during the same period. We just shared a list of 10 short targets in our latest quarterly update .

Unlike some fund managers who are betting on Dow reaching 40000 in a year, our long-short investment strategy doesn’t rely on bull markets to deliver double digit returns. We only rely on hedge fund buy/sell signals. We’re going to go over the latest hedge fund action encompassing American Airlines Group Inc (NASDAQ:AAL). 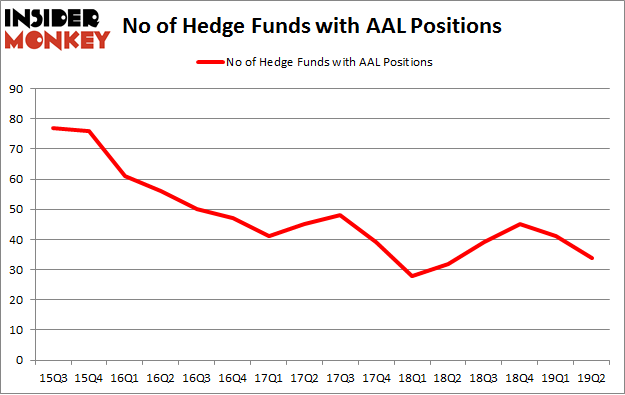 When looking at the institutional investors followed by Insider Monkey, Berkshire Hathaway, managed by Warren Buffett, holds the largest position in American Airlines Group Inc (NASDAQ:AAL). Berkshire Hathaway has a $1.4251 billion position in the stock, comprising 0.7% of its 13F portfolio. The second most bullish fund manager is Alex Snow of Lansdowne Partners, with a $255.4 million position; the fund has 6.3% of its 13F portfolio invested in the stock. Remaining members of the smart money that hold long positions comprise Ken Griffin’s Citadel Investment Group, Stephen C. Freidheim’s Cyrus Capital Partners and Bill Miller’s Miller Value Partners.

Seeing as American Airlines Group Inc (NASDAQ:AAL) has experienced falling interest from hedge fund managers, it’s easy to see that there was a specific group of fund managers who sold off their positions entirely heading into Q3. It’s worth mentioning that Lee Ainslie’s Maverick Capital dumped the largest stake of all the hedgies followed by Insider Monkey, valued at an estimated $11.1 million in stock, and David Keidan’s Buckingham Capital Management was right behind this move, as the fund sold off about $10.8 million worth. These bearish behaviors are important to note, as aggregate hedge fund interest fell by 7 funds heading into Q3.

As you can see these stocks had an average of 28.5 hedge funds with bullish positions and the average amount invested in these stocks was $4291 million. That figure was $2011 million in AAL’s case. Wynn Resorts, Limited (NASDAQ:WYNN) is the most popular stock in this table. On the other hand Icahn Enterprises LP (NASDAQ:IEP) is the least popular one with only 5 bullish hedge fund positions. American Airlines Group Inc (NASDAQ:AAL) is not the most popular stock in this group but hedge fund interest is still above average. This is a slightly positive signal but we’d rather spend our time researching stocks that hedge funds are piling on. Our calculations showed that top 20 most popular stocks among hedge funds returned 24.4% in 2019 through September 30th and outperformed the S&P 500 ETF (SPY) by 4 percentage points. Unfortunately AAL wasn’t nearly as popular as these 20 stocks and hedge funds that were betting on AAL were disappointed as the stock returned -17% during the third quarter and underperformed the market. If you are interested in investing in large cap stocks with huge upside potential, you should check out the top 20 most popular stocks (view the video below) among hedge funds as many of these stocks already outperformed the market so far this year.