Ally Financial Inc (NYSE:ALLY) shareholders have witnessed a decrease in support from the world’s most elite money managers in recent months. Our calculations also showed that ALLY isn’t among the 30 most popular stocks among hedge funds. 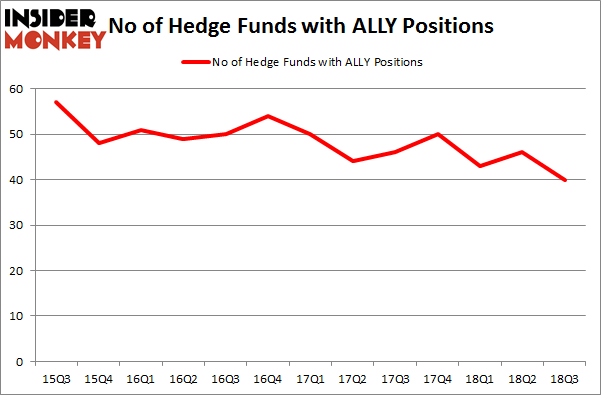 The largest stake in Ally Financial Inc (NYSE:ALLY) was held by Lakewood Capital Management, which reported holding $239 million worth of stock at the end of September. It was followed by Oaktree Capital Management with a $230.4 million position. Other investors bullish on the company included First Pacific Advisors LLC, Arrowstreet Capital, and Basswood Capital.

Since Ally Financial Inc (NYSE:ALLY) has experienced a decline in interest from the smart money, it’s easy to see that there exists a select few funds that slashed their positions entirely by the end of the third quarter. It’s worth mentioning that David Tepper’s Appaloosa Management LP dropped the biggest stake of the 700 funds tracked by Insider Monkey, valued at close to $126.6 million in stock, and Tom Sandell’s Sandell Asset Management was right behind this move, as the fund sold off about $6.7 million worth. These moves are interesting, as total hedge fund interest dropped by 6 funds by the end of the third quarter.

As you can see these stocks had an average of 29.5 hedge funds with bullish positions and the average amount invested in these stocks was $791 million. That figure was $2.20 billion in ALLY’s case. Neurocrine Biosciences, Inc. (NASDAQ:NBIX) is the most popular stock in this table. On the other hand Hologic, Inc. (NASDAQ:HOLX) is the least popular one with only 22 bullish hedge fund positions. Compared to these stocks Ally Financial Inc (NYSE:ALLY) is more popular among hedge funds. Considering that hedge funds are fond of this stock in relation to its market cap peers, it may be a good idea to analyze it in detail and potentially include it in your portfolio.