We know that hedge funds generate strong, risk-adjusted returns over the long run, therefore imitating the picks that they are collectively bullish on can be a profitable strategy for retail investors. With billions of dollars in assets, smart money investors have to conduct complex analyses, spend many resources and use tools that are not always available for the general crowd. This doesn’t mean that they don’t have occasional colossal losses; they do (like Peltz’s recent General Electric losses). However, it is still good idea to keep an eye on hedge fund activity. With this in mind, as the current round of 13F filings has just ended, let’s examine the smart money sentiment towards Advanced Disposal Services, Inc. (NYSE:ADSW).

Advanced Disposal Services, Inc. (NYSE:ADSW) has experienced a decrease in support from the world’s most elite money managers recently. ADSW was in 12 hedge funds’ portfolios at the end of the third quarter of 2018. There were 16 hedge funds in our database with ADSW positions at the end of the previous quarter. Our calculations also showed that adsw isn’t among the 30 most popular stocks among hedge funds.

At Q3’s end, a total of 12 of the hedge funds tracked by Insider Monkey held long positions in this stock, a change of -25% from one quarter earlier. Below, you can check out the change in hedge fund sentiment towards ADSW over the last 13 quarters. So, let’s review which hedge funds were among the top holders of the stock and which hedge funds were making big moves. 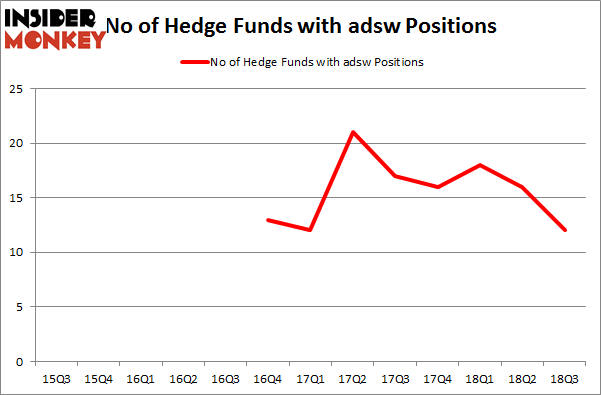 Among these funds, Millennium Management held the most valuable stake in Advanced Disposal Services, Inc. (NYSE:ADSW), which was worth $49.9 million at the end of the third quarter. On the second spot was Renaissance Technologies which amassed $32.7 million worth of shares. Moreover, Electron Capital Partners, Alyeska Investment Group, and Two Sigma Advisors were also bullish on Advanced Disposal Services, Inc. (NYSE:ADSW), allocating a large percentage of their portfolios to this stock.

Due to the fact that Advanced Disposal Services, Inc. (NYSE:ADSW) has witnessed bearish sentiment from the aggregate hedge fund industry, logic holds that there exists a select few fund managers that slashed their full holdings heading into Q3. Intriguingly, Matthew Sidman’s Three Bays Capital dropped the largest stake of the “upper crust” of funds monitored by Insider Monkey, worth an estimated $50.6 million in stock, and Benjamin A. Smith’s Laurion Capital Management was right behind this move, as the fund dropped about $3.3 million worth. These bearish behaviors are intriguing to say the least, as total hedge fund interest dropped by 4 funds heading into Q3.

As you can see these stocks had an average of 20 hedge funds with bullish positions and the average amount invested in these stocks was $371 million. That figure was $182 million in ADSW’s case. Plantronics, Inc. (NYSE:PLT) is the most popular stock in this table. On the other hand Minerals Technologies Inc (NYSE:MTX) is the least popular one with only 15 bullish hedge fund positions. Compared to these stocks Advanced Disposal Services, Inc. (NYSE:ADSW) is even less popular than MTX. Considering that hedge funds aren’t fond of this stock in relation to other companies analyzed in this article, it may be a good idea to analyze it in detail and understand why the smart money isn’t behind this stock. This isn’t necessarily bad news. Although it is possible that hedge funds may think the stock is overpriced and view the stock as a short candidate, they may not be very familiar with the bullish thesis. In either case more research is warranted.