“Value has performed relatively poorly since the 2017 shift, but we believe challenges to the S&P 500’s dominance are mounting and resulting active opportunities away from the index are growing. At some point, this fault line will break, likely on the back of rising rates, and all investors will be reminded that the best time to diversify away from the winners is when it is most painful. The bargain of capturing long-term value may be short-term pain, but enough is eventually enough and it comes time to harvest the benefits.” Those were the words of Clearbridge Investments in its recent market commentary. We aren’t sure whether long-term interest rates will top 5% and value stocks will outperform growth, but we follow hedge fund investor letters to understand where the markets and stocks might be going. That’s why we believe it would be worthwhile to take a look at the hedge fund sentiment on Comerica Incorporated (NYSE:CMA) in order to identify whether reputable and successful top money managers continue to believe in its potential.

Hedge fund ownership of Comerica declined by 12% in Q2, but the stock remains popular among the smart money investors tracked by our database, who own 10.10% of its shares, which pay out an annual dividend of $2.40 to yield 2.89%. Israel Englander’s Millennium Management (5 million shares) and Ken Griffin’s Citadel Investment (3.11 million shares) were two of the funds managed or founded by billionaires which were shareholders of Comerica on June 30, which is why it landed in the top 20 on our list of the 25 Stocks Billionaires Are Piling On. Comerica was upgraded to ‘Strong Buy’ at the end of October by Raymond James on the strength of its deposit base, which includes a low cumulative deposit beta of 21%.

At Q3’s end, a total of 43 of the hedge funds tracked by Insider Monkey were long this stock, a dip of 12% from the first quarter of 2018. The graph below displays the number of hedge funds with bullish position in CMA over the last 6 quarters. With hedge funds’ capital changing hands, there exists a few noteworthy hedge fund managers who were boosting their holdings significantly (or already accumulated large positions). 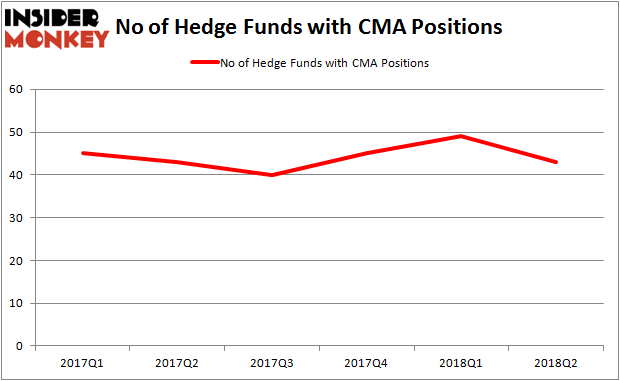 Israel Englander’s Millennium Management was the largest shareholder of Comerica Incorporated (NYSE:CMA), with a stake worth $454.9 million reported as of the end of June. Trailing Millennium Management was Ken Griffin’s Citadel Investment Group, which had amassed a stake valued at $283.1 million. Elizabeth Park Capital Management, Castine Capital Management, and Forest Hill Capital were also very fond of the stock, giving it large weighting in their 13F portfolios.

Seeing as Comerica Incorporated (NYSE:CMA) has faced declining sentiment from hedge fund managers, it’s safe to say that there exists a select few money managers who sold off their positions entirely heading into Q3. It’s worth mentioning that Jim Simons’ Renaissance Technologies dropped the largest stake of the “upper crust” of funds watched by Insider Monkey, valued at close to $42 million in stock, and Columbus Circle Investors was right behind this move, as the fund sold off about $27.3 million worth of shares. These bearish behaviors are interesting, as aggregate hedge fund interest dropped by 6 funds heading into Q3.

As you can see these stocks had an average of 21 hedge funds with bullish positions and the average amount invested in these stocks was $756 million. That figure was $1.57 billion in CMA’s case. D.R. Horton, Inc. (NYSE:DHI) is the most popular stock in this table. On the other hand Telecom Italia S.p.A. (ADR) (NYSE:TI) is the least popular one with only 4 bullish hedge fund positions. Compared to these stocks Comerica Incorporated (NYSE:CMA) is more popular among hedge funds. Considering that hedge funds are fond of this stock in relation to its market cap peers, it may be a good idea to analyze it in detail and potentially include it in your portfolio.