Concerns over rising interest rates and expected further rate increases have hit several stocks hard since the end of the third quarter. The NASDAQ and Russell 2000 indices are already in correction territory. More importantly, the Russell 2000 ETF (IWM) underperformed the larger S&P 500 ETF (SPY) by about 4 percentage points in October. Hedge funds and institutional investors tracked by Insider Monkey usually invest a disproportionate amount of their portfolios in smaller cap stocks. We have been receiving indications that hedge funds were paring back their overall exposure and this is one of the factors behind the recent movements in major indices. In this article, we will take a closer look at hedge fund sentiment towards Apple Inc. (NASDAQ:AAPL).

Following four consecutive quarters of declining hedge fund ownership, Apple Inc. (NASDAQ:AAPL) became a coveted stock in Q3 among the smart money, as there was a 24% increase in the number of funds tracked by Insider Monkey that were long the iPhone maker. That vaulted Apple into a top 10 position among the 30 Most Popular Stocks Among Hedge Funds in Q3 of 2018, after it had fallen to 15th in the middle of 2018. Apple also ranked as one of Billionaire Ken Fisher’s Top Stock Picks Heading Into 2019, and is a favorite stock of billionaire Warren Buffett.

What have hedge funds been doing with Apple Inc. (NASDAQ:AAPL)?

At the end of the third quarter, a total of 112 of the hedge funds tracked by Insider Monkey held long positions in this stock, a 24% rise from the second quarter of 2018. On the other hand, there were a total of 109 hedge funds with a bullish position in AAPL a year earlier. With hedge funds’ capital changing hands, there exists an “upper tier” of noteworthy hedge fund managers who were adding to their stakes significantly (or already accumulated large positions). 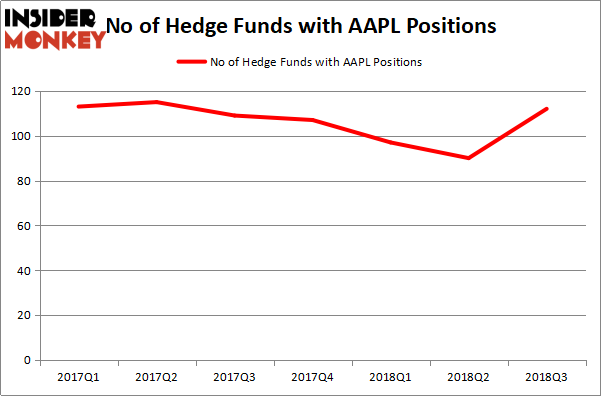 Among these funds, Warren Buffett’s Berkshire Hathaway held the most valuable stake in Apple Inc. (NASDAQ:AAPL), which was worth $56.99 billion at the end of the third quarter. On the second spot was Fisher Asset Management which amassed $27.88 billion worth of shares. Moreover, Citadel Investment Group, AQR Capital Management, and Adage Capital Management were also bullish on Apple Inc. (NASDAQ:AAPL), allocating a large percentage of their portfolios to this stock.

As you can see these stocks had an average of 147 hedge funds with bullish positions and the average amount invested in these stocks was $20.44 billion. That figure was $68.02 billion in AAPL’s case. Microsoft Corporation (NASDAQ:MSFT) is the most popular stock in this table. On the other hand Alphabet Inc (NASDAQ:GOOG) is the least popular one with only 130 bullish hedge fund positions. Compared to these other heavyweight stocks, Apple Inc. (NASDAQ:AAPL) is the least popular, though the former hedge fund darling is finally gaining more support from the smart money.