Is YPF Sociedad Anonima (NYSE:YPF) a good investment right now? We check hedge fund and billionaire investor sentiment before delving into hours of research. Hedge funds spend millions of dollars on Ivy League graduates, expert networks, and get tips from investment bankers and industry insiders. Sure they sometimes fail miserably, but their consensus stock picks historically outperformed the market after adjusting for known risk factors.

YPF Sociedad Anonima (NYSE:YPF) has experienced a decrease in hedge fund interest in recent months. YPF was in 15 hedge funds’ portfolios at the end of June. There were 21 hedge funds in our database with YPF positions at the end of the previous quarter. Our calculations also showed that YPF isn’t among the 30 most popular stocks among hedge funds (view the video below).

If you’d ask most shareholders, hedge funds are viewed as unimportant, outdated investment vehicles of the past. While there are over 8000 funds trading at the moment, Our experts look at the leaders of this group, about 750 funds. These investment experts orchestrate bulk of the smart money’s total capital, and by tracking their highest performing equity investments, Insider Monkey has spotted various investment strategies that have historically defeated the broader indices. Insider Monkey’s flagship hedge fund strategy outpaced the S&P 500 index by around 5 percentage points per year since its inception in May 2014. We were able to generate large returns even by identifying short candidates. Our portfolio of short stocks lost 25.7% since February 2017 (through September 30th) even though the market was up more than 33% during the same period. We just shared a list of 10 short targets in our latest quarterly update .

Unlike some fund managers who are betting on Dow reaching 40000 in a year, our long-short investment strategy doesn’t rely on bull markets to deliver double digit returns. We only rely on hedge fund buy/sell signals. We’re going to take a gander at the new hedge fund action surrounding YPF Sociedad Anonima (NYSE:YPF).

At Q2’s end, a total of 15 of the hedge funds tracked by Insider Monkey were long this stock, a change of -29% from the previous quarter. By comparison, 24 hedge funds held shares or bullish call options in YPF a year ago. With hedgies’ positions undergoing their usual ebb and flow, there exists a select group of noteworthy hedge fund managers who were increasing their stakes considerably (or already accumulated large positions). 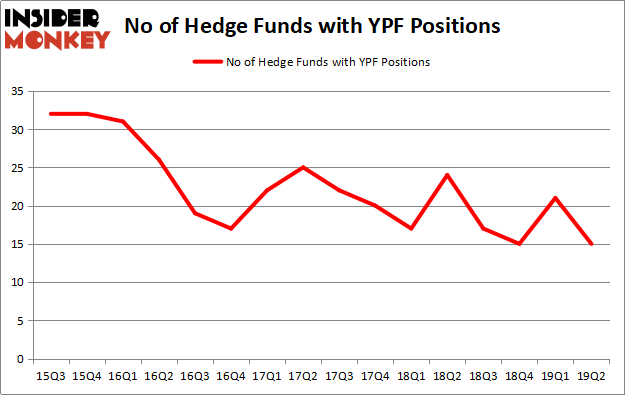 When looking at the institutional investors followed by Insider Monkey, Jonathan Kolatch’s Redwood Capital Management has the biggest position in YPF Sociedad Anonima (NYSE:YPF), worth close to $16 million, comprising 1.1% of its total 13F portfolio. On Redwood Capital Management’s heels is Driehaus Capital, led by Richard Driehaus, holding a $13.2 million position; the fund has 0.4% of its 13F portfolio invested in the stock. Some other professional money managers that hold long positions consist of Joshua Friedman and Mitchell Julis’s Canyon Capital Advisors, and Hari Hariharan’s NWI Management.

Since YPF Sociedad Anonima (NYSE:YPF) has witnessed declining sentiment from hedge fund managers, logic holds that there is a sect of money managers that slashed their full holdings by the end of the second quarter. At the top of the heap, Israel Englander’s Millennium Management dropped the largest stake of all the hedgies followed by Insider Monkey, totaling an estimated $25.2 million in stock. Tom Wagner and Ara Cohen’s fund, Knighthead Capital, also cut its stock, about $19.2 million worth. These transactions are important to note, as total hedge fund interest was cut by 6 funds by the end of the second quarter.

As you can see these stocks had an average of 31 hedge funds with bullish positions and the average amount invested in these stocks was $1400 million. That figure was $70 million in YPF’s case. Axalta Coating Systems Ltd (NYSE:AXTA) is the most popular stock in this table. On the other hand Douglas Emmett, Inc. (NYSE:DEI) is the least popular one with only 19 bullish hedge fund positions. Compared to these stocks YPF Sociedad Anonima (NYSE:YPF) is even less popular than DEI. Hedge funds dodged a bullet by taking a bearish stance towards YPF. Our calculations showed that the top 20 most popular hedge fund stocks returned 24.4% in 2019 through September 30th and outperformed the S&P 500 ETF (SPY) by 4 percentage points. Unfortunately YPF wasn’t nearly as popular as these 20 stocks (hedge fund sentiment was very bearish); YPF investors were disappointed as the stock returned -48.8% during the third quarter and underperformed the market. If you are interested in investing in large cap stocks with huge upside potential, you should check out the top 20 most popular stocks among hedge funds as many of these stocks already outperformed the market so far in 2019.