Whitestone REIT (NYSE:WSR) was in 4 hedge funds’ portfolios at the end of the second quarter of 2019. WSR has seen a decrease in hedge fund sentiment in recent months. There were 5 hedge funds in our database with WSR positions at the end of the previous quarter. Our calculations also showed that WSR isn’t among the 30 most popular stocks among hedge funds (see the video below).

At the moment there are a large number of methods market participants have at their disposal to size up their holdings. A couple of the most under-the-radar methods are hedge fund and insider trading interest. We have shown that, historically, those who follow the best picks of the elite fund managers can trounce the S&P 500 by a significant margin (see the details here).

Heading into the third quarter of 2019, a total of 4 of the hedge funds tracked by Insider Monkey held long positions in this stock, a change of -20% from the previous quarter. Below, you can check out the change in hedge fund sentiment towards WSR over the last 16 quarters. So, let’s find out which hedge funds were among the top holders of the stock and which hedge funds were making big moves. 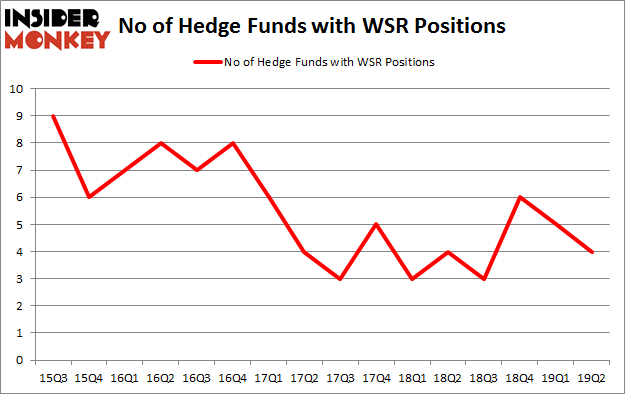 When looking at the institutional investors followed by Insider Monkey, Renaissance Technologies holds the number one position in Whitestone REIT (NYSE:WSR). Renaissance Technologies has a $15.5 million position in the stock, comprising less than 0.1%% of its 13F portfolio. Coming in second is Citadel Investment Group, managed by Ken Griffin, which holds a $0.9 million position; less than 0.1%% of its 13F portfolio is allocated to the company. Other members of the smart money that hold long positions include Ken Griffin’s Citadel Investment Group, Israel Englander’s Millennium Management and John Overdeck and David Siegel’s Two Sigma Advisors.

Judging by the fact that Whitestone REIT (NYSE:WSR) has experienced falling interest from the entirety of the hedge funds we track, it’s easy to see that there were a few money managers that elected to cut their positions entirely by the end of the second quarter. It’s worth mentioning that Matthew Hulsizer’s PEAK6 Capital Management dropped the biggest investment of the 750 funds monitored by Insider Monkey, comprising an estimated $0.2 million in stock, and Paul Marshall and Ian Wace’s Marshall Wace LLP was right behind this move, as the fund cut about $0.1 million worth. These transactions are important to note, as total hedge fund interest fell by 1 funds by the end of the second quarter.

As you can see these stocks had an average of 10.75 hedge funds with bullish positions and the average amount invested in these stocks was $60 million. That figure was $17 million in WSR’s case. Cowen Inc. (NASDAQ:COWN) is the most popular stock in this table. On the other hand Priority Technology Holdings, Inc. (NASDAQ:PRTH) is the least popular one with only 2 bullish hedge fund positions. Whitestone REIT (NYSE:WSR) is not the least popular stock in this group but hedge fund interest is still below average. Our calculations showed that top 20 most popular stocks among hedge funds returned 24.4% in 2019 through September 30th and outperformed the S&P 500 ETF (SPY) by 4 percentage points. A small number of hedge funds were also right about betting on WSR as the stock returned 10.9% during the same time frame and outperformed the market by an even larger margin.