We at Insider Monkey have gone over 738 13F filings that hedge funds and famous value investors are required to file by the SEC. The 13F filings show the funds’ and investors’ portfolio positions as of March 31st. In this article we look at what those investors think of The Kraft Heinz Company (NASDAQ:KHC).

The Kraft Heinz Company (NASDAQ:KHC) was in 29 hedge funds’ portfolios at the end of March. KHC has seen a decrease in hedge fund sentiment of late. There were 33 hedge funds in our database with KHC positions at the end of the previous quarter. Our calculations also showed that khc isn’t among the 30 most popular stocks among hedge funds.

How are hedge funds trading The Kraft Heinz Company (NASDAQ:KHC)?

Heading into the second quarter of 2019, a total of 29 of the hedge funds tracked by Insider Monkey held long positions in this stock, a change of -12% from the previous quarter. The graph below displays the number of hedge funds with bullish position in KHC over the last 15 quarters. With the smart money’s sentiment swirling, there exists a few key hedge fund managers who were adding to their stakes significantly (or already accumulated large positions). 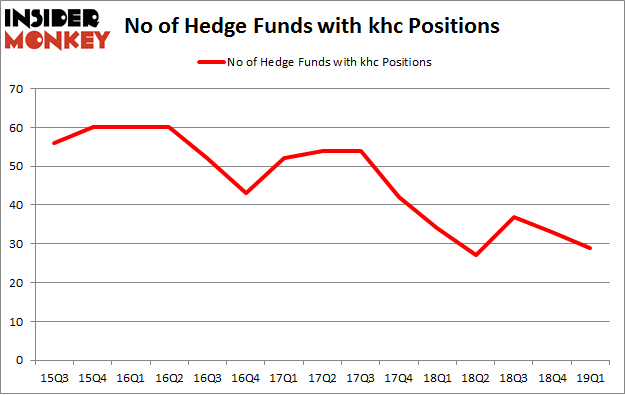 Among these funds, Berkshire Hathaway held the most valuable stake in The Kraft Heinz Company (NASDAQ:KHC), which was worth $10632 million at the end of the first quarter. On the second spot was Citadel Investment Group which amassed $151.6 million worth of shares. Moreover, D E Shaw, Alkeon Capital Management, and Alyeska Investment Group were also bullish on The Kraft Heinz Company (NASDAQ:KHC), allocating a large percentage of their portfolios to this stock.

Seeing as The Kraft Heinz Company (NASDAQ:KHC) has experienced a decline in interest from the entirety of the hedge funds we track, logic holds that there were a few hedge funds that elected to cut their full holdings by the end of the third quarter. Intriguingly, Jim Simons’s Renaissance Technologies dropped the largest stake of the 700 funds tracked by Insider Monkey, valued at close to $57.1 million in stock. George Soros’s fund, Soros Fund Management, also dropped its stock, about $12.9 million worth. These transactions are intriguing to say the least, as total hedge fund interest was cut by 4 funds by the end of the third quarter.

As you can see these stocks had an average of 14.5 hedge funds with bullish positions and the average amount invested in these stocks was $398 million. That figure was $11048 million in KHC’s case. Edwards Lifesciences Corporation (NYSE:EW) is the most popular stock in this table. On the other hand The Royal Bank of Scotland Group plc (NYSE:RBS) is the least popular one with only 3 bullish hedge fund positions. Compared to these stocks The Kraft Heinz Company (NASDAQ:KHC) is more popular among hedge funds. Our calculations showed that top 20 most popular stocks among hedge funds returned 1.9% in Q2 through May 30th and outperformed the S&P 500 ETF (SPY) by more than 3 percentage points. Unfortunately KHC wasn’t nearly as popular as these 20 stocks and hedge funds that were betting on KHC were disappointed as the stock returned -14.9% during the same period and underperformed the market. If you are interested in investing in large cap stocks with huge upside potential, you should check out the top 20 most popular stocks among hedge funds as 13 of these stocks already outperformed the market in Q2.