With the first-quarter round of 13F filings behind us it is time to take a look at the stocks in which some of the best money managers in the world preferred to invest or sell heading into the first quarter. One of these stocks was Teva Pharmaceutical Industries Limited (NYSE:TEVA).

Teva Pharmaceutical Industries Limited (NYSE:TEVA) was in 32 hedge funds’ portfolios at the end of March. TEVA has experienced a decrease in support from the world’s most elite money managers in recent months. There were 35 hedge funds in our database with TEVA positions at the end of the previous quarter. Our calculations also showed that TEVA isn’t among the 30 most popular stocks among hedge funds.

At the end of the first quarter, a total of 32 of the hedge funds tracked by Insider Monkey were long this stock, a change of -9% from one quarter earlier. On the other hand, there were a total of 28 hedge funds with a bullish position in TEVA a year ago. With hedge funds’ capital changing hands, there exists a few noteworthy hedge fund managers who were upping their stakes significantly (or already accumulated large positions). 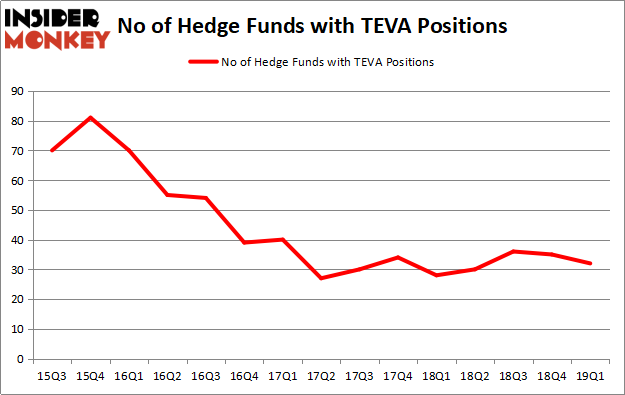 The largest stake in Teva Pharmaceutical Industries Limited (NYSE:TEVA) was held by Berkshire Hathaway, which reported holding $678.1 million worth of stock at the end of March. It was followed by Abrams Capital Management with a $283 million position. Other investors bullish on the company included Polaris Capital Management, Brahman Capital, and Highfields Capital Management.

Since Teva Pharmaceutical Industries Limited (NYSE:TEVA) has experienced bearish sentiment from the entirety of the hedge funds we track, it’s easy to see that there was a specific group of hedgies that decided to sell off their entire stakes by the end of the third quarter. Interestingly, William B. Gray’s Orbis Investment Management cut the largest position of all the hedgies followed by Insider Monkey, totaling an estimated $76.2 million in stock, and Barry Rosenstein’s JANA Partners was right behind this move, as the fund dropped about $37.8 million worth. These bearish behaviors are intriguing to say the least, as aggregate hedge fund interest was cut by 3 funds by the end of the third quarter.

As you can see these stocks had an average of 32.5 hedge funds with bullish positions and the average amount invested in these stocks was $861 million. That figure was $1713 million in TEVA’s case. Total System Services, Inc. (NYSE:TSS) is the most popular stock in this table. On the other hand Franklin Resources, Inc. (NYSE:BEN) is the least popular one with only 28 bullish hedge fund positions. Teva Pharmaceutical Industries Limited (NYSE:TEVA) is not the least popular stock in this group but hedge fund interest is still below average. This is a slightly negative signal and we’d rather spend our time researching stocks that hedge funds are piling on. Our calculations showed that top 20 most popular stocks among hedge funds returned 1.9% in Q2 through May 30th and outperformed the S&P 500 ETF (SPY) by more than 3 percentage points. Unfortunately TEVA wasn’t nearly as popular as these 20 stocks (hedge fund sentiment was quite bearish); TEVA investors were disappointed as the stock returned -43.6% during the same time period and underperformed the market. If you are interested in investing in large cap stocks with huge upside potential, you should check out the top 20 most popular stocks among hedge funds as 13 of these stocks already outperformed the market so far in Q2.