Hedge Funds and other institutional investors have just completed filing their 13Fs with the Securities and Exchange Commission, revealing their equity portfolios as of the end of September. At Insider Monkey, we follow over 700 of the best-performing investors and by analyzing their 13F filings, we can determine the stocks that they are collectively bullish on. One of their picks is Seattle Genetics, Inc. (NASDAQ:SGEN), so let’s take a closer look at the sentiment that surrounds it in the current quarter.

Is Seattle Genetics, Inc. (NASDAQ:SGEN) a first-rate stock to buy now? Investors who are in the know are getting less optimistic. The number of bullish hedge fund bets shrunk by 3 recently. Our calculations also showed that sgen isn’t among the 30 most popular stocks among hedge funds. SGEN was in 15 hedge funds’ portfolios at the end of the third quarter of 2018. There were 18 hedge funds in our database with SGEN holdings at the end of the previous quarter. 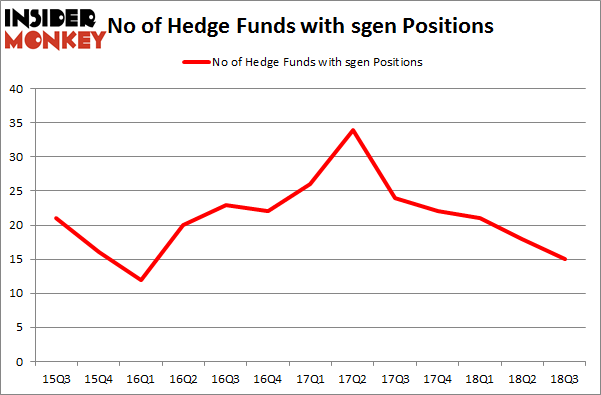 More specifically, Baker Bros. Advisors was the largest shareholder of Seattle Genetics, Inc. (NASDAQ:SGEN), with a stake worth $3936.7 million reported as of the end of September. Trailing Baker Bros. Advisors was Matrix Capital Management, which amassed a stake valued at $298.2 million. D E Shaw, Two Sigma Advisors, and Balyasny Asset Management were also very fond of the stock, giving the stock large weights in their portfolios.

Because Seattle Genetics, Inc. (NASDAQ:SGEN) has experienced bearish sentiment from the entirety of the hedge funds we track, it’s safe to say that there lies a certain “tier” of funds that slashed their full holdings in the third quarter. Interestingly, Ken Griffin’s Citadel Investment Group dumped the largest stake of all the hedgies followed by Insider Monkey, valued at close to $88.5 million in stock. Anand Parekh’s fund, Alyeska Investment Group, also cut its stock, about $17.6 million worth. These moves are interesting, as aggregate hedge fund interest dropped by 3 funds in the third quarter.

As you can see these stocks had an average of 19.75 hedge funds with bullish positions and the average amount invested in these stocks was $883 million. That figure was $4.30 billion in SGEN’s case. F5 Networks, Inc. (NASDAQ:FFIV) is the most popular stock in this table. On the other hand Teleflex Incorporated (NYSE:TFX) is the least popular one with only 17 bullish hedge fund positions. Compared to these stocks Seattle Genetics, Inc. (NASDAQ:SGEN) is even less popular than TFX. Considering that hedge funds aren’t fond of this stock in relation to other companies analyzed in this article, it may be a good idea to analyze it in detail and understand why the smart money isn’t behind this stock. This isn’t necessarily bad news. Although it is possible that hedge funds may think the stock is overpriced and view the stock as a short candidate, they may not be very familiar with the bullish thesis. In either case more research is warranted.