Hedge funds and large money managers usually invest with a focus on the long-term horizon and, therefore, short-lived dips or bumps on the charts, usually don’t make them change their opinion towards a company. This time it may be different. During the fourth quarter of 2018 we observed increased volatility and small-cap stocks underperformed the market. Things completely reversed during the first half of 2019. Hedge fund investor letters indicated that they are cutting their overall exposure, closing out some position and doubling down on others. Let’s take a look at the hedge fund sentiment towards Pearson PLC (NYSE:PSO) to find out whether it was one of their high conviction long-term ideas.

Pearson PLC (NYSE:PSO) shares haven’t seen a lot of action during the second quarter. Overall, hedge fund sentiment was unchanged. The stock was in 4 hedge funds’ portfolios at the end of the second quarter of 2019. The level and the change in hedge fund popularity aren’t the only variables you need to analyze to decipher hedge funds’ perspectives. A stock may witness a boost in popularity but it may still be less popular than similarly priced stocks. That’s why at the end of this article we will examine companies such as News Corp (NASDAQ:NWS), Spirit AeroSystems Holdings, Inc. (NYSE:SPR), and Nielsen Holdings plc (NYSE:NLSN) to gather more data points. Our calculations also showed that PSO isn’t among the 30 most popular stocks among hedge funds (view the video below).

Unlike some fund managers who are betting on Dow reaching 40000 in a year, our long-short investment strategy doesn’t rely on bull markets to deliver double digit returns. We only rely on hedge fund buy/sell signals. We’re going to go over the fresh hedge fund action surrounding Pearson PLC (NYSE:PSO). 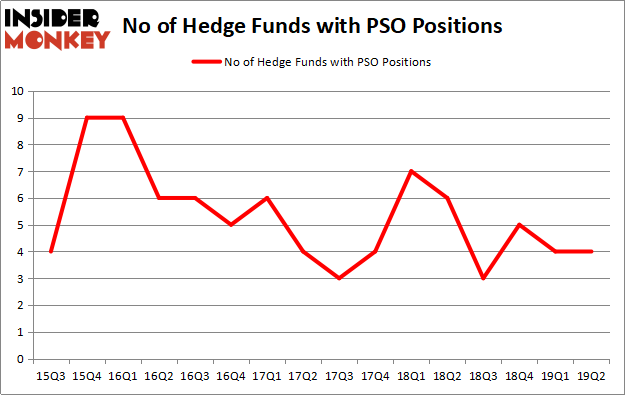 According to publicly available hedge fund and institutional investor holdings data compiled by Insider Monkey, Renaissance Technologies holds the biggest position in Pearson PLC (NYSE:PSO). Renaissance Technologies has a $4.1 million position in the stock, comprising less than 0.1%% of its 13F portfolio. On Renaissance Technologies’s heels is Arrowstreet Capital, managed by Peter Rathjens, Bruce Clarke and John Campbell, which holds a $2.5 million position; the fund has less than 0.1%% of its 13F portfolio invested in the stock. Other members of the smart money that are bullish encompass John Overdeck and David Siegel’s Two Sigma Advisors, and Michael Gelband’s ExodusPoint Capital.

We view hedge fund activity in the stock unfavorable, but in this case there was only a single hedge fund selling its entire position: Point72 Asset Management. One hedge fund selling its entire position doesn’t always imply a bearish intent. Theoretically a hedge fund may decide to sell a promising position in order to invest the proceeds in a more promising idea. However, we don’t think this is the case in this case because only one of the 800+ hedge funds tracked by Insider Monkey identified as a viable investment and initiated a position in the stock (that fund was ExodusPoint Capital).

As you can see these stocks had an average of 23 hedge funds with bullish positions and the average amount invested in these stocks was $921 million. That figure was $7 million in PSO’s case. Nielsen Holdings plc (NYSE:NLSN) is the most popular stock in this table. On the other hand News Corp (NASDAQ:NWS) is the least popular one with only 9 bullish hedge fund positions. Compared to these stocks Pearson PLC (NYSE:PSO) is even less popular than NWS. Hedge funds dodged a bullet by taking a bearish stance towards PSO. Our calculations showed that the top 20 most popular hedge fund stocks returned 24.4% in 2019 through September 30th and outperformed the S&P 500 ETF (SPY) by 4 percentage points. Unfortunately PSO wasn’t nearly as popular as these 20 stocks (hedge fund sentiment was very bearish); PSO investors were disappointed as the stock returned -12.1% during the third quarter and underperformed the market. If you are interested in investing in large cap stocks with huge upside potential, you should check out the top 20 most popular stocks among hedge funds as many of these stocks already outperformed the market so far in 2019.