The market has been volatile in the last few months as the Federal Reserve continued its rate cuts and uncertainty looms over trade negotiations with China. Small cap stocks have been hit hard as a result, as the Russell 2000 ETF (IWM) has underperformed the larger S&P 500 ETF (SPY) by more than 10 percentage points over the last 12 months. SEC filings and hedge fund investor letters indicate that the smart money seems to be paring back their overall long exposure since summer months, though some funds increased their exposure dramatically at the end of Q2 and the beginning of Q3. In this article, we analyze what the smart money thinks of NIO Inc. (NYSE:NIO) and find out how it is affected by hedge funds’ moves.

NIO Inc. (NYSE:NIO) shareholders have witnessed a decrease in hedge fund interest lately. Our calculations also showed that NIO isn’t among the 30 most popular stocks among hedge funds (view the video below).

What have hedge funds been doing with NIO Inc. (NYSE:NIO)?

At the end of the second quarter, a total of 14 of the hedge funds tracked by Insider Monkey were long this stock, a change of -33% from the first quarter of 2019. Below, you can check out the change in hedge fund sentiment towards NIO over the last 16 quarters. With hedgies’ positions undergoing their usual ebb and flow, there exists a select group of notable hedge fund managers who were adding to their stakes considerably (or already accumulated large positions). 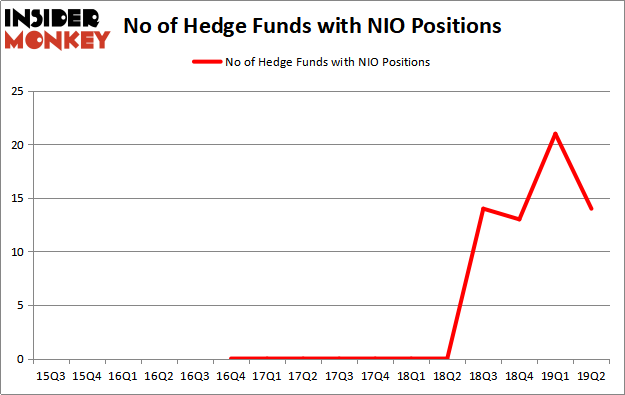 The largest stake in NIO Inc. (NYSE:NIO) was held by Hillhouse Capital Management, which reported holding $106.9 million worth of stock at the end of March. It was followed by Segantii Capital with a $7.3 million position. Other investors bullish on the company included Arrowgrass Capital Partners, Aristeia Capital, and Alyeska Investment Group.

Due to the fact that NIO Inc. (NYSE:NIO) has experienced falling interest from the entirety of the hedge funds we track, logic holds that there were a few hedge funds who sold off their full holdings in the second quarter. Interestingly, D. E. Shaw’s D E Shaw said goodbye to the largest investment of all the hedgies tracked by Insider Monkey, valued at close to $12.8 million in stock, and Wang Chan’s Serenity Capital was right behind this move, as the fund cut about $12.7 million worth. These moves are interesting, as aggregate hedge fund interest dropped by 7 funds in the second quarter.

As you can see these stocks had an average of 9.5 hedge funds with bullish positions and the average amount invested in these stocks was $53 million. That figure was $147 million in NIO’s case. Chemical Financial Corporation (NASDAQ:CHFC) is the most popular stock in this table. On the other hand Holly Energy Partners, L.P. (NYSE:HEP) is the least popular one with only 1 bullish hedge fund positions. NIO Inc. (NYSE:NIO) is not the most popular stock in this group but hedge fund interest is still above average. This is a slightly positive signal but we’d rather spend our time researching stocks that hedge funds are piling on. Our calculations showed that top 20 most popular stocks among hedge funds returned 24.4% in 2019 through September 30th and outperformed the S&P 500 ETF (SPY) by 4 percentage points. Unfortunately NIO wasn’t nearly as popular as these 20 stocks and hedge funds that were betting on NIO were disappointed as the stock returned -38.8% during the third quarter and underperformed the market. If you are interested in investing in large cap stocks with huge upside potential, you should check out the top 20 most popular stocks among hedge funds as many of these stocks already outperformed the market so far this year.

Were Hedge Funds Right About Souring On Grand Canyon Education Inc (LOPE)?
Monthly Newsletter Strategy
Download a free copy of our newsletter and see the details inside!
Hedge Fund Resource Center
Related News
Hedge Funds Have Never Been This Bullish On NIO Inc. (NIO) Here’s What Hedge Funds Think About NIO Inc. (NIO) 11 Largest Auto Insurance Companies In The US In 2019 10 Poorest Cities in America in 2019 8 Lowest Tar and Nicotine Cigarette Brands in 2019
Billionaire Hedge Funds