Nelnet, Inc. (NYSE:NNI) investors should be aware of a decrease in support from the world’s most elite money managers in recent months. NNI was in 13 hedge funds’ portfolios at the end of June. There were 15 hedge funds in our database with NNI holdings at the end of the previous quarter. Our calculations also showed that NNI isn’t among the 30 most popular stocks among hedge funds (view the video below). 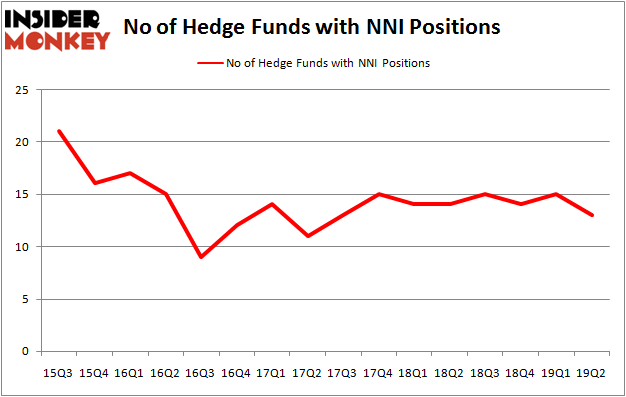 According to Insider Monkey’s hedge fund database, Magnolia Capital Fund, managed by Adam Peterson, holds the largest position in Nelnet, Inc. (NYSE:NNI). Magnolia Capital Fund has a $66.9 million position in the stock, comprising 7.3% of its 13F portfolio. Sitting at the No. 2 spot is Renaissance Technologies, with a $6.2 million position; less than 0.1%% of its 13F portfolio is allocated to the stock. Remaining hedge funds and institutional investors that hold long positions include Thomas G. Maheras’s Tegean Capital Management, Peter Rathjens, Bruce Clarke and John Campbell’s Arrowstreet Capital and Cliff Asness’s AQR Capital Management.

Seeing as Nelnet, Inc. (NYSE:NNI) has witnessed declining sentiment from the aggregate hedge fund industry, we can see that there was a specific group of money managers that slashed their entire stakes last quarter. At the top of the heap, Paul Marshall and Ian Wace’s Marshall Wace LLP said goodbye to the largest investment of the “upper crust” of funds followed by Insider Monkey, comprising about $0.8 million in stock. David Harding’s fund, Winton Capital Management, also said goodbye to its stock, about $0.5 million worth. These transactions are important to note, as total hedge fund interest dropped by 2 funds last quarter.

Let’s check out hedge fund activity in other stocks – not necessarily in the same industry as Nelnet, Inc. (NYSE:NNI) but similarly valued. We will take a look at Alamos Gold Inc (NYSE:AGI), Sunrun Inc (NASDAQ:RUN), Cactus, Inc. (NYSE:WHD), and Evertec Inc (NYSE:EVTC). This group of stocks’ market values are similar to NNI’s market value.

As you can see these stocks had an average of 18.75 hedge funds with bullish positions and the average amount invested in these stocks was $296 million. That figure was $94 million in NNI’s case. Cactus, Inc. (NYSE:WHD) is the most popular stock in this table. On the other hand Alamos Gold Inc (NYSE:AGI) is the least popular one with only 12 bullish hedge fund positions. Nelnet, Inc. (NYSE:NNI) is not the least popular stock in this group but hedge fund interest is still below average. Our calculations showed that top 20 most popular stocks among hedge funds returned 24.4% in 2019 through September 30th and outperformed the S&P 500 ETF (SPY) by 4 percentage points. A small number of hedge funds were also right about betting on NNI as the stock returned 7.7% during the same time frame and outperformed the market by an even larger margin.