Most investors tend to think that hedge funds and other asset managers are worthless, as they cannot beat even simple index fund portfolios. In fact, most people expect hedge funds to compete with and outperform the bull market that we have witnessed over the past few years. However, hedge funds are generally partially hedged and aim at delivering attractive risk-adjusted returns rather than following the ups and downs of equity markets hoping that they will outperform the broader market. Our research shows that hedge funds do have great stock picking skills, so let’s take a glance at the smart money sentiment towards Monolithic Power Systems, Inc. (NASDAQ:MPWR).

Is Monolithic Power Systems, Inc. (NASDAQ:MPWR) a bargain? Money managers are getting less optimistic. The number of long hedge fund bets went down by 3 in recent months. Our calculations also showed that MPWR isn’t among the 30 most popular stocks among hedge funds.

What does the smart money think about Monolithic Power Systems, Inc. (NASDAQ:MPWR)?

Heading into the fourth quarter of 2018, a total of 18 of the hedge funds tracked by Insider Monkey were bullish on this stock, a change of -14% from the second quarter of 2018. The graph below displays the number of hedge funds with bullish position in MPWR over the last 13 quarters. With hedge funds’ sentiment swirling, there exists a few notable hedge fund managers who were increasing their holdings significantly (or already accumulated large positions). 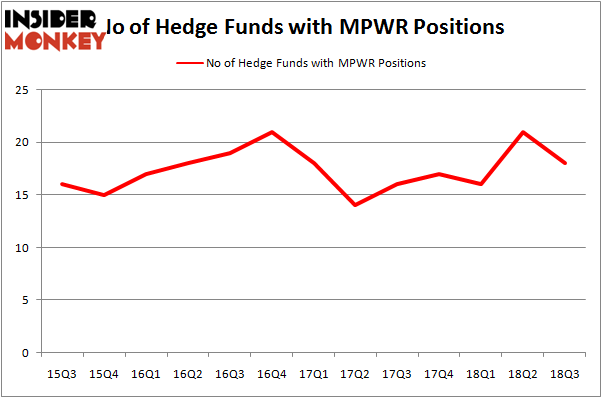 According to publicly available hedge fund and institutional investor holdings data compiled by Insider Monkey, Alex Sacerdote’s Whale Rock Capital Management has the largest position in Monolithic Power Systems, Inc. (NASDAQ:MPWR), worth close to $39.8 million, comprising 0.9% of its total 13F portfolio. Sitting at the No. 2 spot is Polar Capital, led by Brian Ashford-Russell and Tim Woolley, holding a $35.9 million position; 0.3% of its 13F portfolio is allocated to the company. Some other professional money managers that are bullish encompass Israel Englander’s Millennium Management, Charles Clough’s Clough Capital Partners and Noam Gottesman’s GLG Partners.

Seeing as Monolithic Power Systems, Inc. (NASDAQ:MPWR) has witnessed falling interest from hedge fund managers, logic holds that there exists a select few hedge funds that decided to sell off their full holdings in the third quarter. Intriguingly, John Hurley’s Cavalry Asset Management sold off the largest investment of the “upper crust” of funds followed by Insider Monkey, valued at about $42.5 million in stock, and Phill Gross and Robert Atchinson’s Adage Capital Management was right behind this move, as the fund sold off about $11.8 million worth. These moves are intriguing to say the least, as total hedge fund interest was cut by 3 funds in the third quarter.

As you can see these stocks had an average of 21.75 hedge funds with bullish positions and the average amount invested in these stocks was $552 million. That figure was $127 million in MPWR’s case. Syneos Health, Inc. (NASDAQ:SYNH) is the most popular stock in this table. On the other hand Brixmor Property Group Inc (NYSE:BRX) is the least popular one with only 18 bullish hedge fund positions. Compared to these stocks Monolithic Power Systems, Inc. (NASDAQ:MPWR) is even less popular than BRX. Considering that hedge funds aren’t fond of this stock in relation to other companies analyzed in this article, it may be a good idea to analyze it in detail and understand why the smart money isn’t behind this stock. This isn’t necessarily bad news. Although it is possible that hedge funds may think the stock is overpriced and view the stock as a short candidate, they may not be very familiar with the bullish thesis. In either case more research is warranted.