Concerns over rising interest rates and expected further rate increases have hit several stocks hard since the end of the third quarter. NASDAQ and Russell 2000 indices are already in correction territory. More importantly, Russell 2000 ETF (IWM) underperformed the larger S&P 500 ETF (SPY) by about 4 percentage points in the first half of the fourth quarter. Hedge funds and institutional investors tracked by Insider Monkey usually invest a disproportionate amount of their portfolios in smaller cap stocks. We have been receiving indications that hedge funds were paring back their overall exposure and this is one of the factors behind the recent movements in major indices. In this article, we will take a closer look at hedge fund sentiment towards Masimo Corporation (NASDAQ:MASI).

Masimo Corporation (NASDAQ:MASI) has experienced a decrease in hedge fund interest of late. MASI was in 28 hedge funds’ portfolios at the end of September. There were 29 hedge funds in our database with MASI positions at the end of the previous quarter. Our calculations also showed that MASI isn’t among the 30 most popular stocks among hedge funds.

In the 21st century investor’s toolkit there are numerous formulas stock market investors can use to evaluate publicly traded companies. Two of the most innovative formulas are hedge fund and insider trading sentiment. Our researchers have shown that, historically, those who follow the top picks of the top investment managers can outpace their index-focused peers by a solid margin (see the details here).

At the end of the third quarter, a total of 28 of the hedge funds tracked by Insider Monkey held long positions in this stock, a change of -3% from the second quarter of 2018. By comparison, 23 hedge funds held shares or bullish call options in MASI heading into this year. So, let’s find out which hedge funds were among the top holders of the stock and which hedge funds were making big moves. 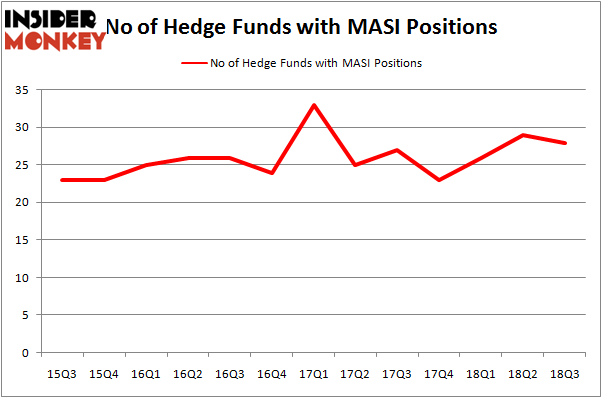 According to publicly available hedge fund and institutional investor holdings data compiled by Insider Monkey, Israel Englander’s Millennium Management has the largest position in Masimo Corporation (NASDAQ:MASI), worth close to $137.5 million, comprising 0.2% of its total 13F portfolio. Sitting at the No. 2 spot is Paul Marshall and Ian Wace of Marshall Wace LLP, with a $69 million position; 0.6% of its 13F portfolio is allocated to the company. Other members of the smart money that are bullish include Ken Griffin’s Citadel Investment Group, D. E. Shaw’s D E Shaw and Jim Simons’s Renaissance Technologies.

Because Masimo Corporation (NASDAQ:MASI) has witnessed declining sentiment from the entirety of the hedge funds we track, we can see that there lies a certain “tier” of hedgies who sold off their entire stakes last quarter. Interestingly, Arthur B Cohen and Joseph Healey’s Healthcor Management LP dropped the largest position of all the hedgies watched by Insider Monkey, comprising an estimated $72.9 million in stock. Matthew Tewksbury’s fund, Stevens Capital Management, also dropped its stock, about $4.1 million worth. These moves are important to note, as aggregate hedge fund interest dropped by 1 funds last quarter.

As you can see these stocks had an average of 22.5 hedge funds with bullish positions and the average amount invested in these stocks was $476 million. That figure was $503 million in MASI’s case. Crown Holdings, Inc. (NYSE:CCK) is the most popular stock in this table. On the other hand The Trade Desk, Inc. (NASDAQ:TTD) is the least popular one with only 14 bullish hedge fund positions. Masimo Corporation (NASDAQ:MASI) is not the most popular stock in this group but hedge fund interest is still above average. This is a slightly positive signal but we’d rather spend our time researching stocks that hedge funds are piling on. In this regard CCK might be a better candidate to consider a long position.

Do Hedge Funds Love Exelixis, Inc. (EXEL)?
Monthly Newsletter Strategy
Download a free copy of our newsletter and see the details inside!
Hedge Fund Resource Center
Related News
37 Major Stories Summarizing What’s Happening In The Financial Markets Today Biogen, LendingClub, IBM, and More: Here’s What Analysts Had to Say About These Five Stocks Hedge Fund Sentiment Is Stagnant On Masimo Corporation (MASI) Why Mead Johnson Nutrition CO (MJN), Boston Scientific Corporation (BSX), And 2 Other Stocks Might Be Right For Your Portfolio Blue Jay Capital Betting On Big Returns From These Healthcare Stocks Why Synacor, Atlas Air, Tutor Perini and EP Energy Are Up By Double-Digits Today Investor Confidence In Masimo Corporation (MASI) Is On The Rise The 10 Best Islands to Visit in 2019 5 Most Socially Responsible Companies in America 5 Ways You Can Eliminate Credit Card Debt
Billionaire Hedge Funds